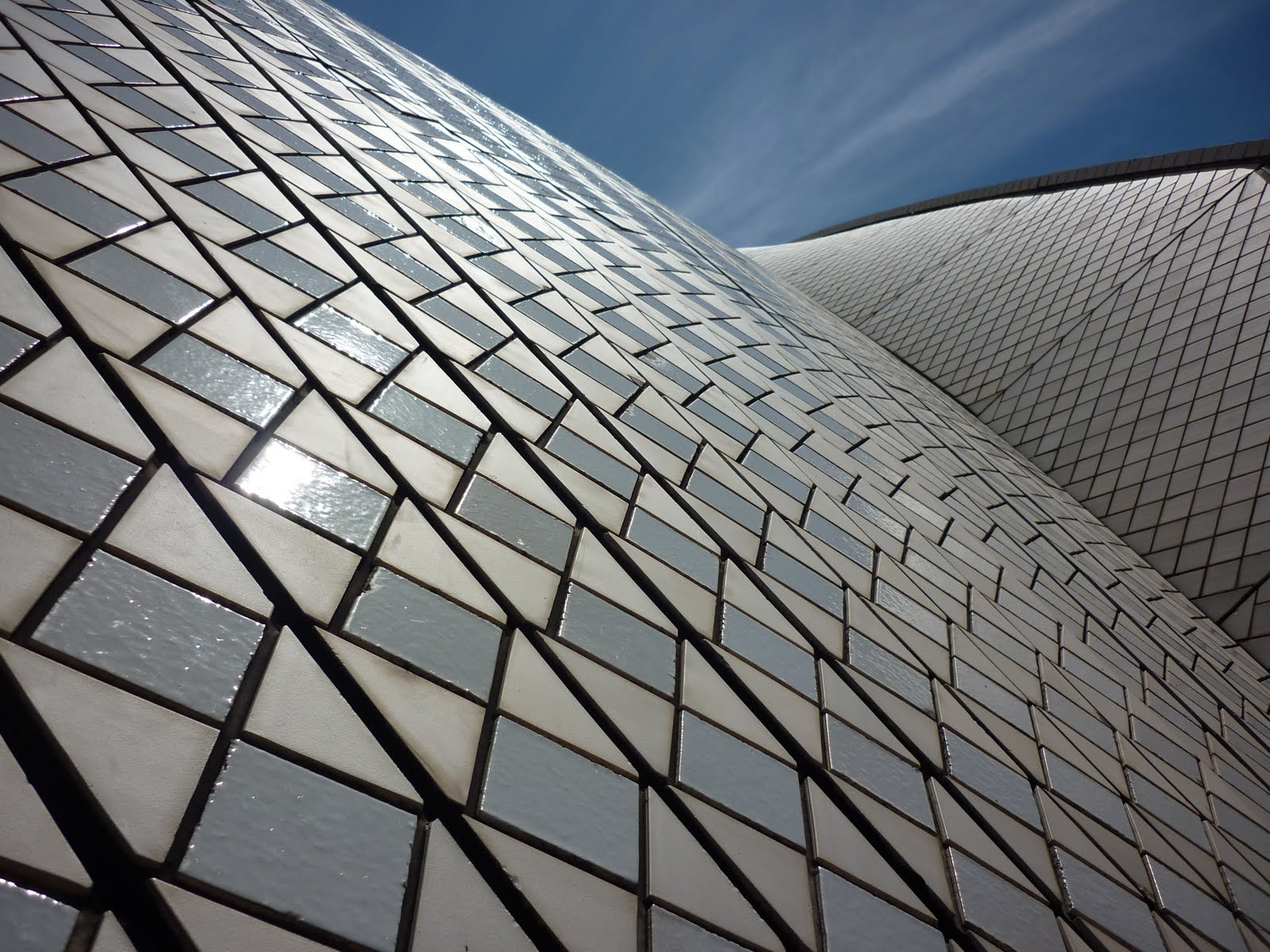 Looking up across the sails of the Opera House - some beaut Swedish tiles.

My father and the engineers had been working on the geometry of the shells for some years and at the same time he was looking into the ceramic tile question.
What kind of ceramic tiles could be used for cladding the shells?
He wanted a white tile and on his trips back and forth between Sydney and Denmark, among other places he visited, he was in Iran and especially Isfahan. My father was very much taken by the ceramic surfaces on the big domes of the mosques.
Even though the tiles were dirty with dust from the desert my father saw how they would still sparkle and shine in the sunlight.
He tried to emulate that glaze as if on ceramic tiles in Europe and he found a Swedish factory that made ceramic tiles for the paper pulp factories in Sweden and Finland.
www.skane.com

1.056 million Tiles were made for the Opera House and one of my father's employees at the office was actually staying in Denmark when the rest of the office went to Sydney.
He sorted out every tile for the Opera House!
So he was at the tile factory whenever the firing was done. He looked through all the tiles, rejected some and let others pass that were then sent to Sydney.
Therefore there is this wonderful surface of tiles that you see on the Sydney Opera House shells.
But before that they had to find a way to fix the tiles to the shells...
One day my father was walking in the town of Helsingborg in Sweden and by accident he met the famous Swedish architect Sigurd Lewerentz on the street and as a gesture he bent over and said
"It is an honour to meet you Mr. Lewerentz."
As his eyes looked down onto the pavement he was walking on, he saw that the tiles were set in a diagonal pattern rather than a straight checkerboard pattern. He thought to himself ahh if we set them diagonally that would be much better. So this is one reason why the tiles on the Opera House shells are set in a diagonal pattern. The other reason was to find a surface which allowed for the application of tiles in an orderly manner. He couldn't find that and the engineer had problems structurally in erecting the concrete shells that my father envisaged but eventually my father had the idea of using a sphere as the base for the geometry of the shells.
Labels: Sydney Opera House

Thanks for visiting. Your feedback is welcome!

You are welcome to use any of these photos.
Just drop me a line if it is on the front cover of National Geographic ...