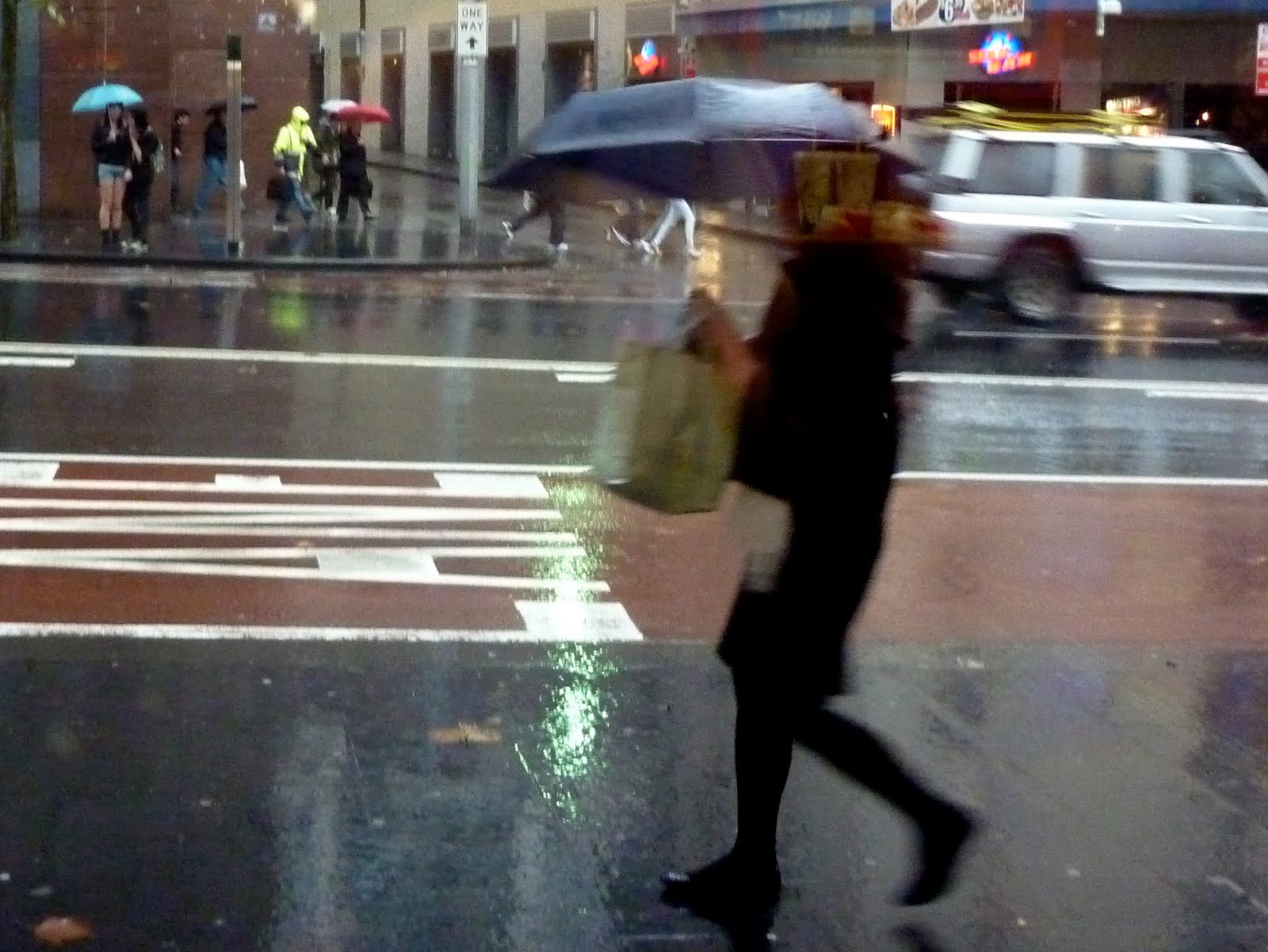 How did this happen, checking through my shots taken from a well known food outlet, on another rainy Sydney day, the image of what is on her mind is there. When I am really hungry I sometimes feel this way - must have food!
11 comments:
Labels: People, Rain, Reflection 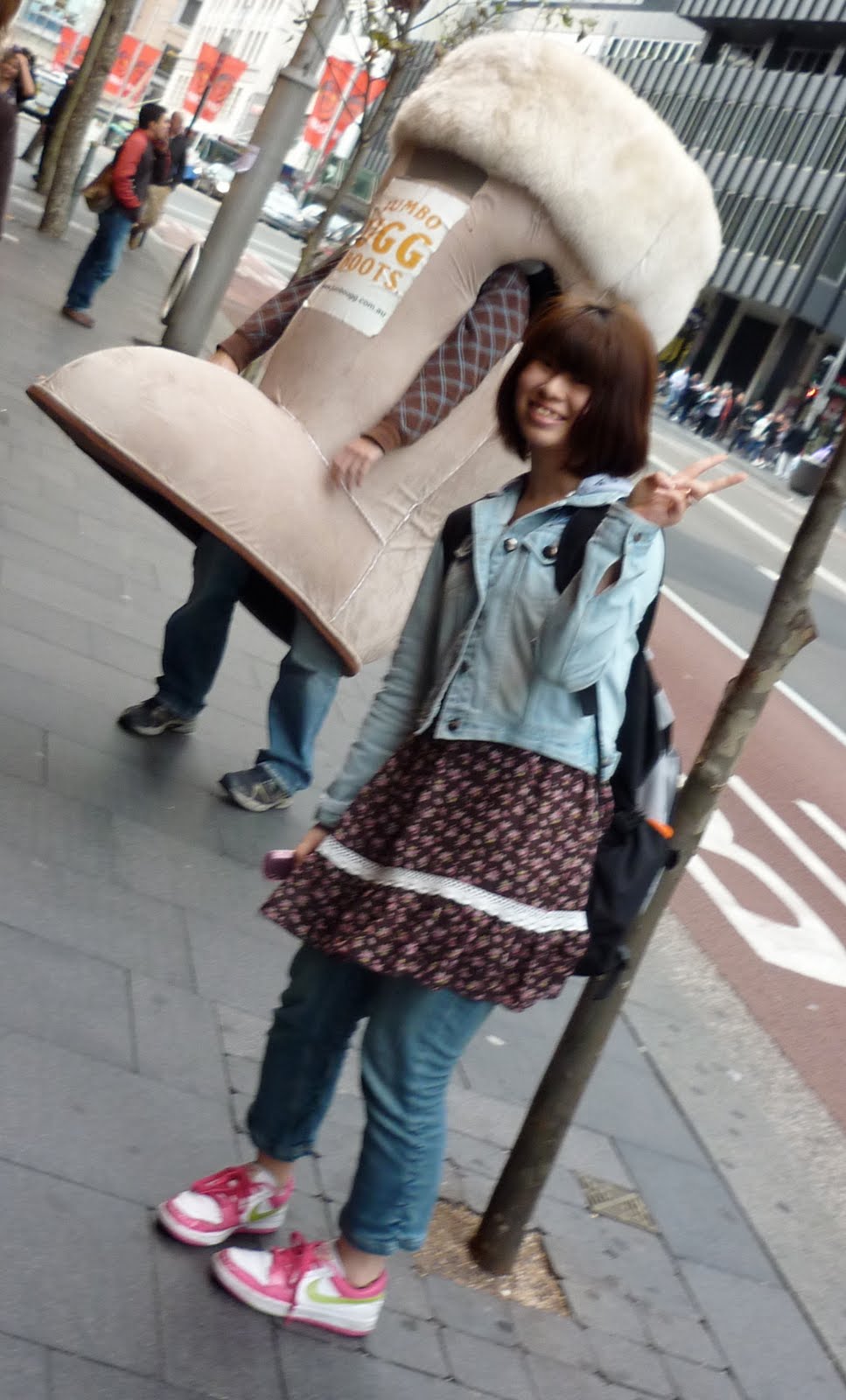 Ugh boot man is only seen occasionally and on Friday afternoon he was particularly happy. TGIF and all that. He was dancing and high fiving the pedestrians along George Street. This girl was getting her photo taken and was happy for me to snap one of her as well. Why the peace symbol?
7 comments:
Labels: People 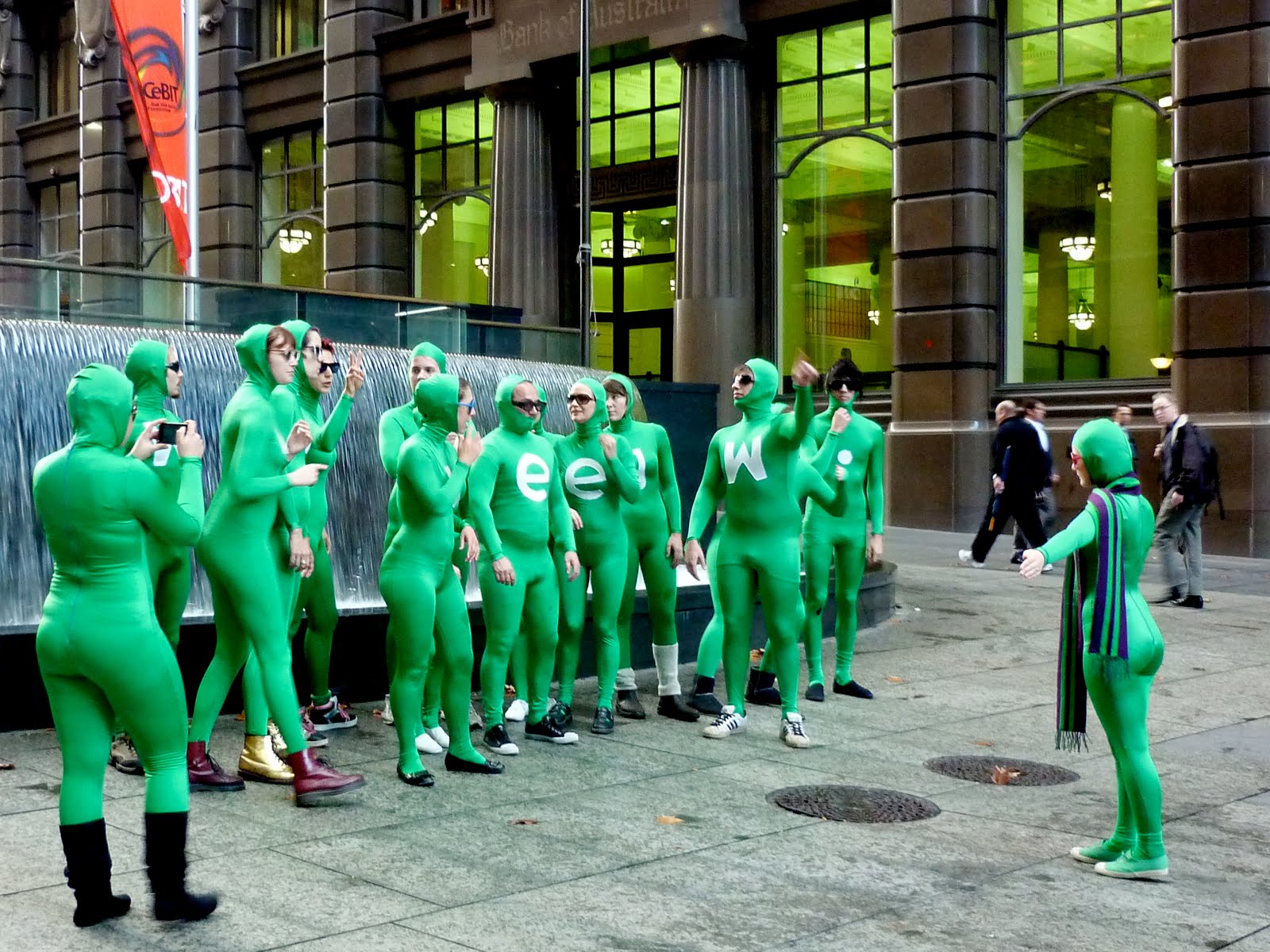 I cannot help it, I am enamoured of the greengang and their crazy antics. Here they were starting a race down Martin Place. I have seen them every morning this week in all sorts of weather. They follow pedestrians and mock their walk, they help people cross the road and play hide and seek with children, if they ever see anyone dressed in green they clap and go crazy. Shame I don't have any green clothes - why is that?
13 comments:
Labels: Biennale, Fountains, Martin Place, People 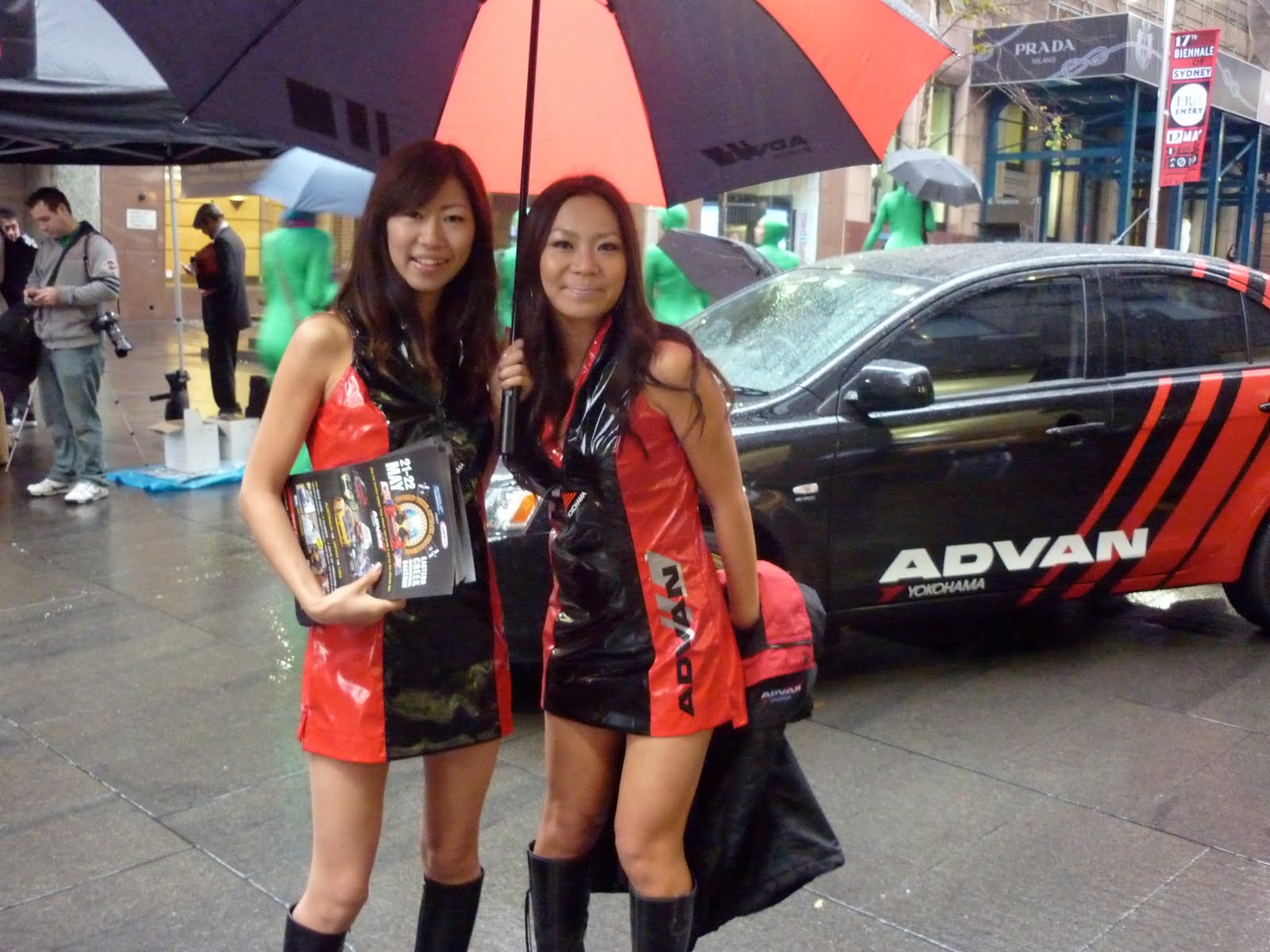 These two girls were out in the rain in Martin Place where a few racing cars were on display. They asked me if I wanted them to put the umbrella down and pose with them. Dedicated workers in this weather. As you can see the green gang was out and about again, I think I have enough photos of them - but they certainly make me smile on the way to work.
11 comments:
Labels: Biennale, Martin Place, People, Rain 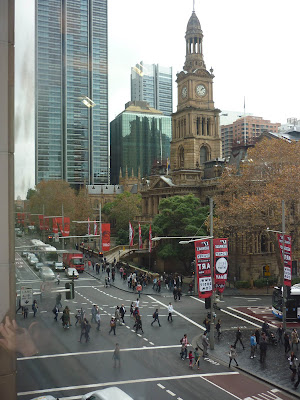 Plenty of grey skies in Sydney at the moment, I took this shot from Kinokunia bookstore of the Sydney Town Hall. Later I noticed the reflection of the woman in the bottom left hand corner
9 comments:
Labels: People, Reflection 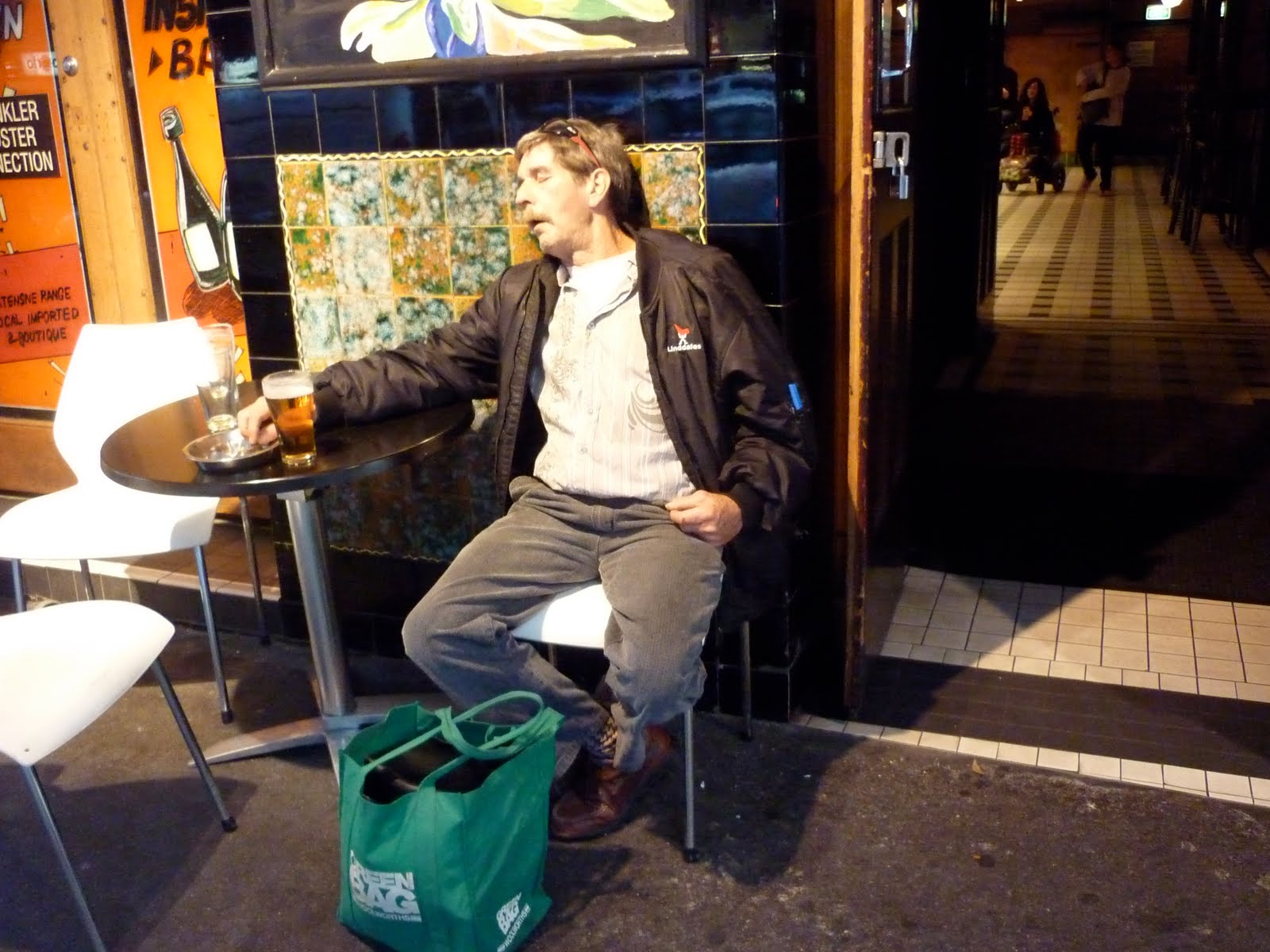 Walking past the Edinburgh Castle Hotel yesterday afternoon on my way home I saw this exhausted soul having a nap, looks like he has a full "Schooner of New" (that is a size and type of beer in Sydney). I walked about 10 more metres and decided to go back and take the picture. This is a beautiful inner city pub which has a mixture of patrons from the office to the blue collar.
10 comments:
Labels: People

The Emden Gun in Hyde Park 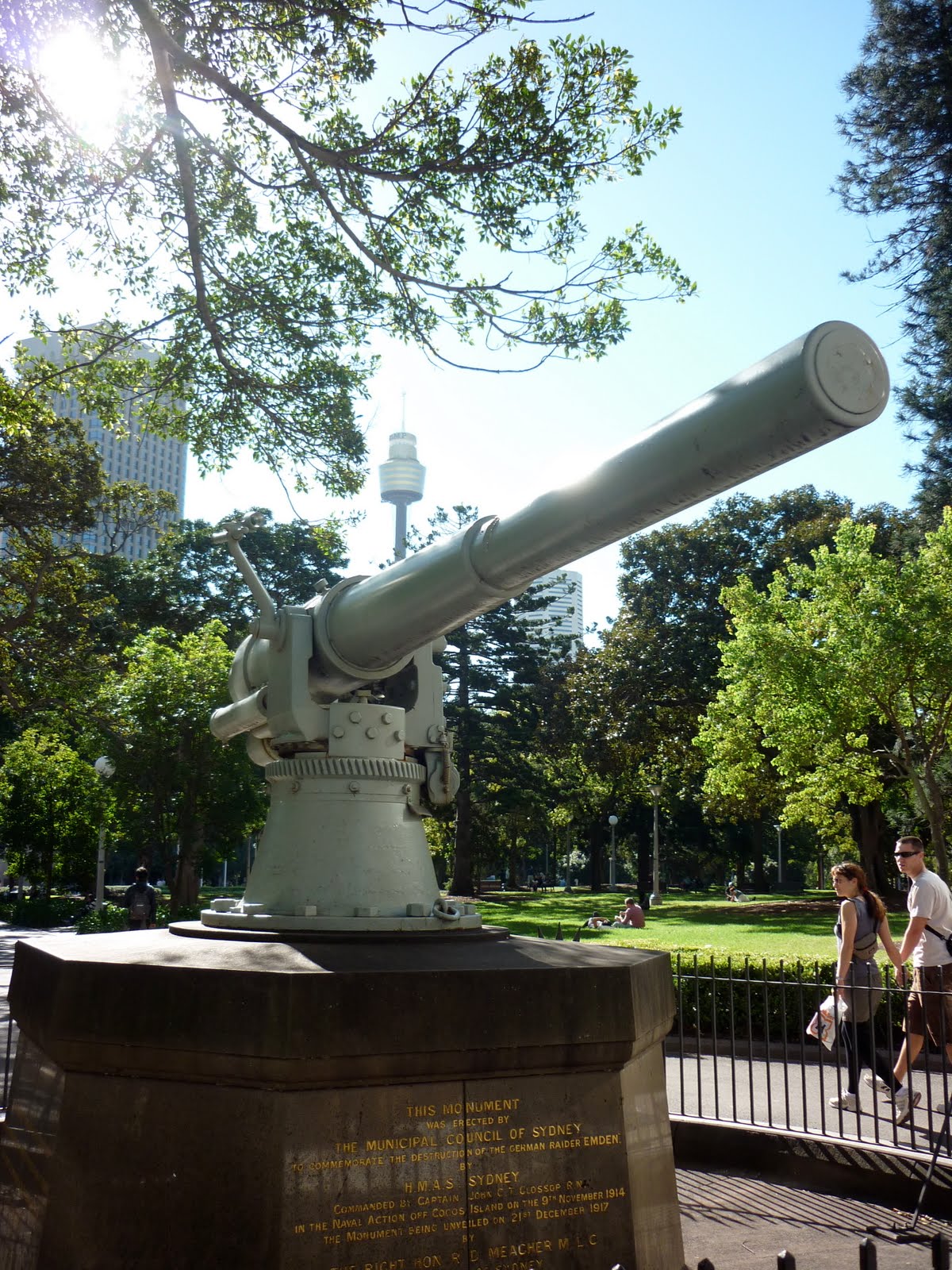 I always like to stop and look at this war relic at the south east corner of Hyde Park, it is a high trafic zone for people walking down the hill from Oxford Street into the city. On a sunny day Hyde Park is a great place to sit around.

This gun was from the Emden a German warship in World War I. The Emden was a successful raider in the Indian Ocean and was run aground by her captain to prevent her from sinking, after engaging the HMAS Sydney at the Battle of Cocos Island. In 1917, a 105 mm gun from Emden was installed as a monument.
6 comments:
Labels: Centrepoint Tower, War Memorials 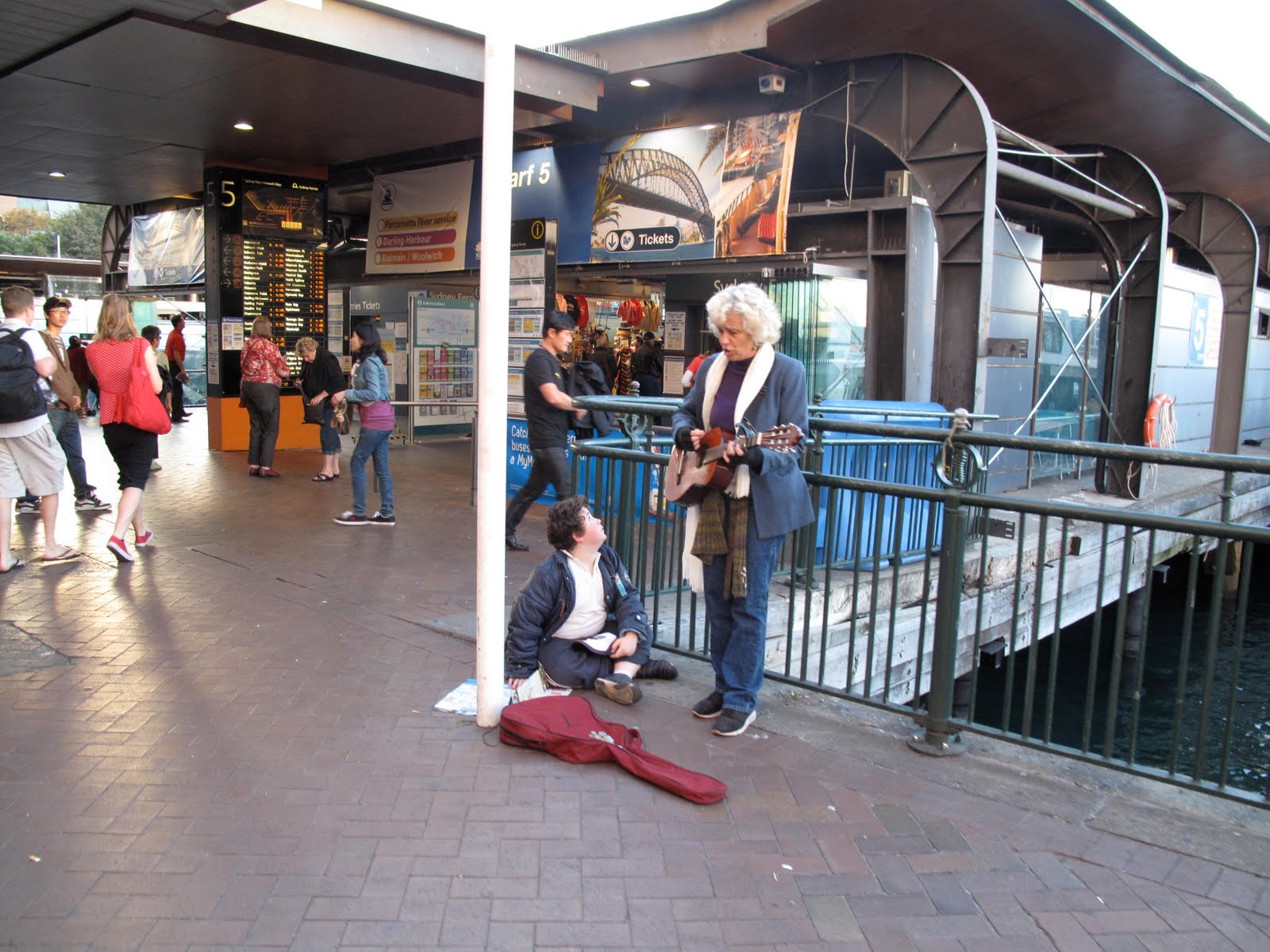 This busker was quietly singing a song I didn't know while her son sat and waited. Again down by Circular Quay - the busiest place for buskers in Sydney.
9 comments:
Labels: Circular Quay, People 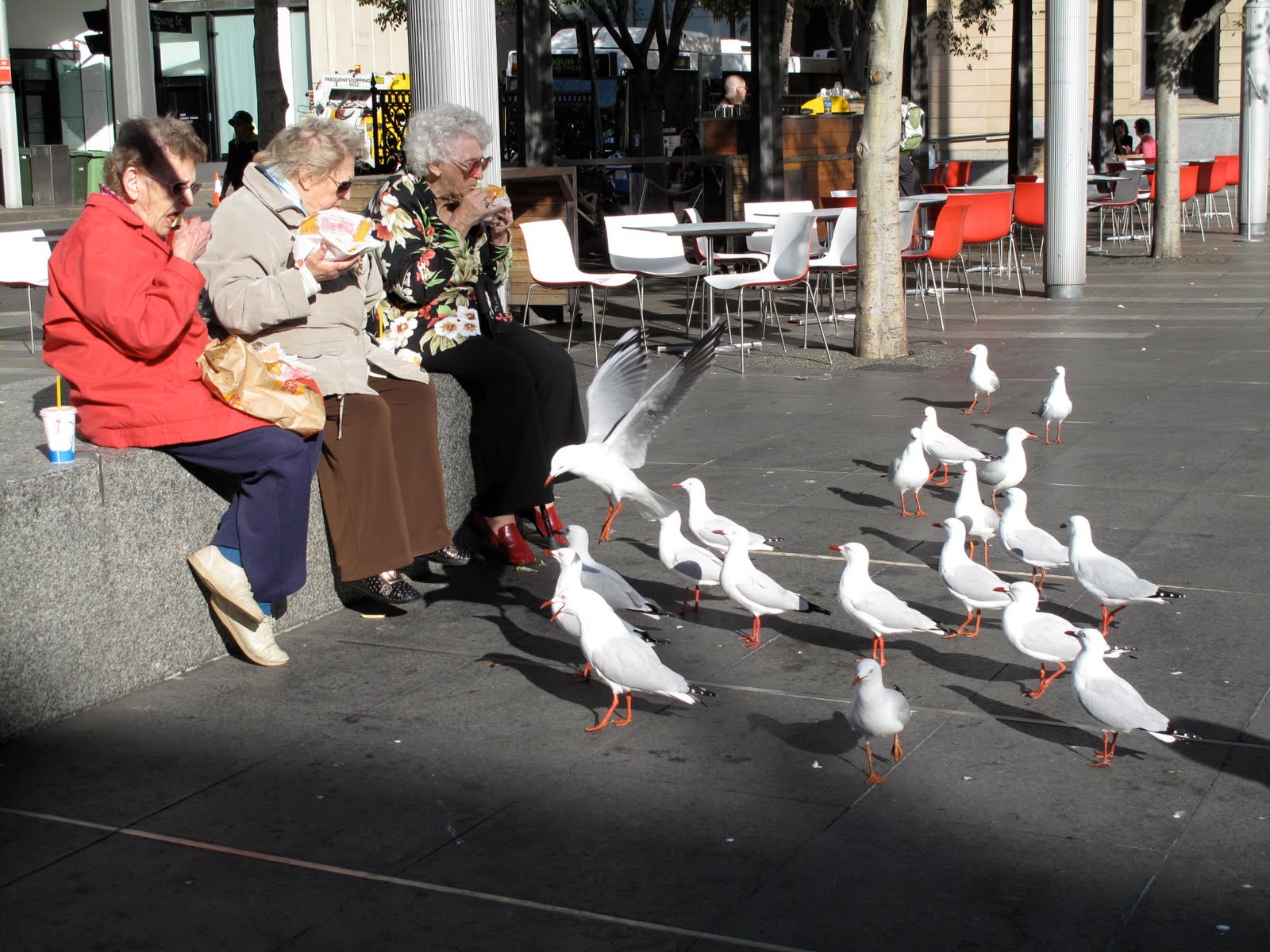 A Saturday outing is not complete without sitting down with your friends for some lunch, the seagulls can be a bit insistent to be fed, I usually wait to the end so I don't encourage a whole flock, what do you do?
5 comments:
Labels: Circular Quay 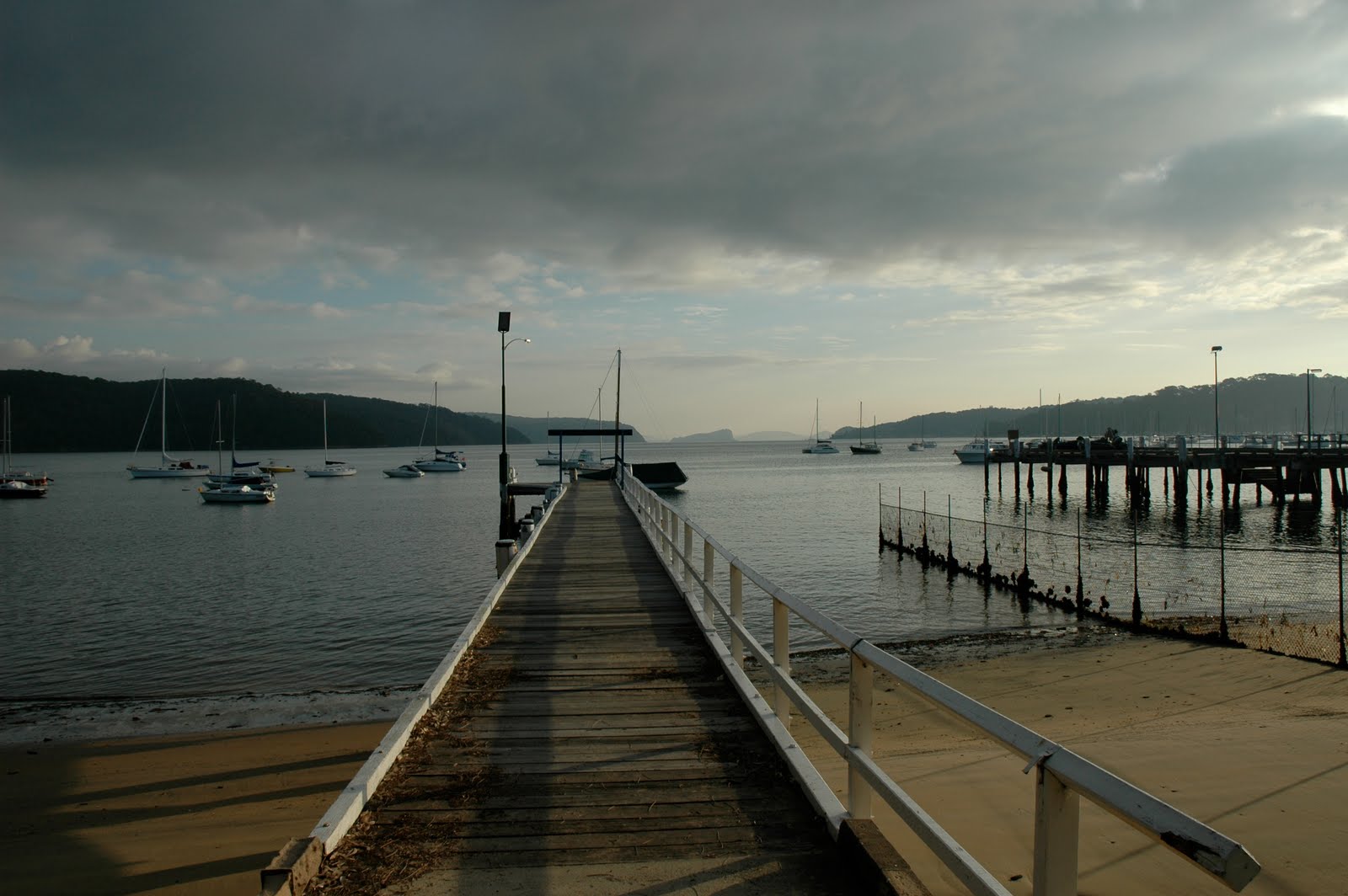 This wharf is on Pittwater, about 30km north of Sydney. I was down there a few weeks ago and some teenage boys were riding off a homemade ramp placed at the end of the wharf and flying with their bike into the water. Did not have my camera with me, isn't that always the way. If you look straight ahead, a little to the right of the end of the wharf is Lion Island, a long way into the distance but does look a bit like a lion sitting on his haunches. What do you think?
8 comments:
Labels: Palm Beach 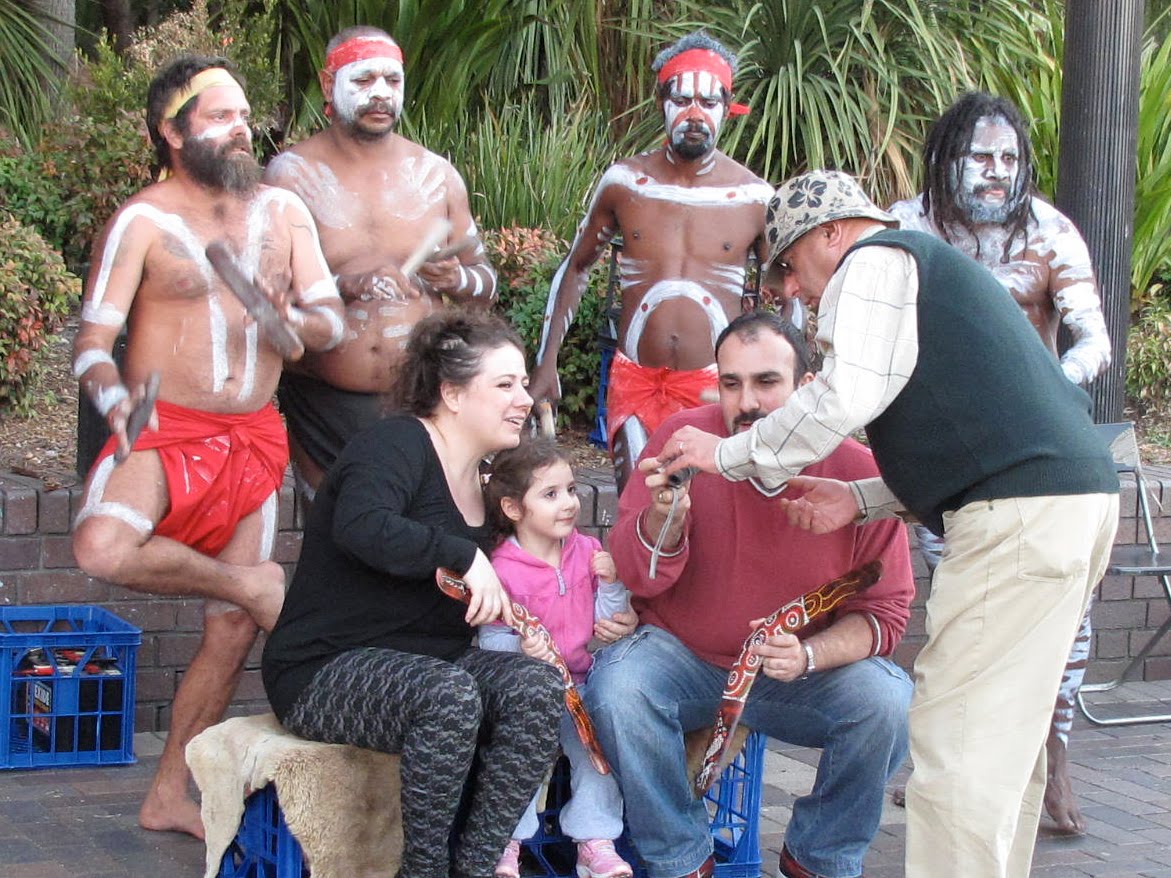 At Circular Quay you can see some Aboriginal dancers who are popular with most tourists. They sell CDs and must make enough to make it worthwhile.
7 comments:
Labels: Circular Quay 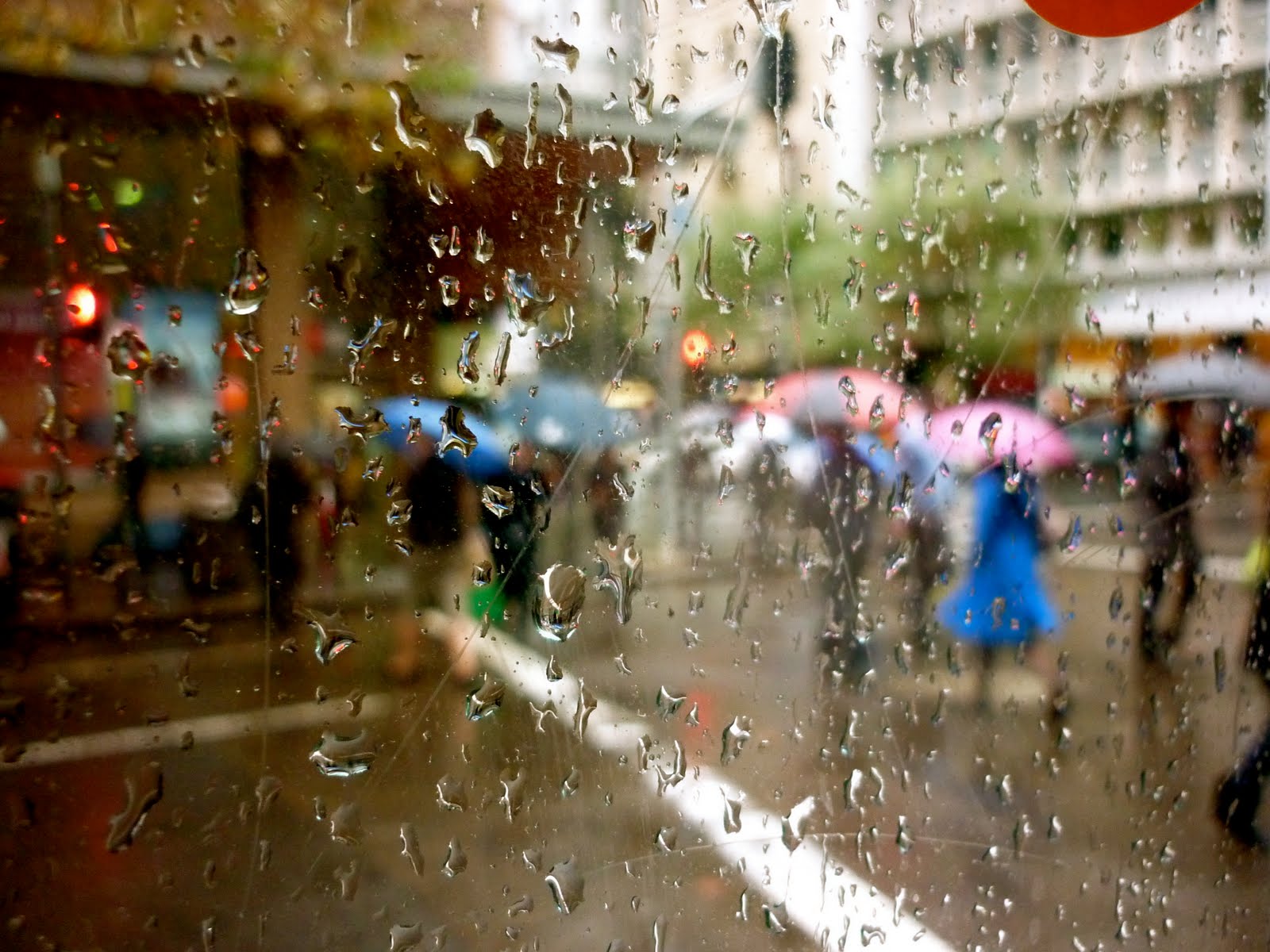 A few wet days and I miss the sunshine already. There is not much shelter in a phone booth these days, I guess people don't make long calls from them anymore. It has been awhile since I've used one, here I am using it to shelter my camera from the lunchtime rain. The latest vandalism craze in Sydney seems to be scratching any sort of glass, all the buses windows have been done, I guess it saves on spray paint.
7 comments:
Labels: Rain 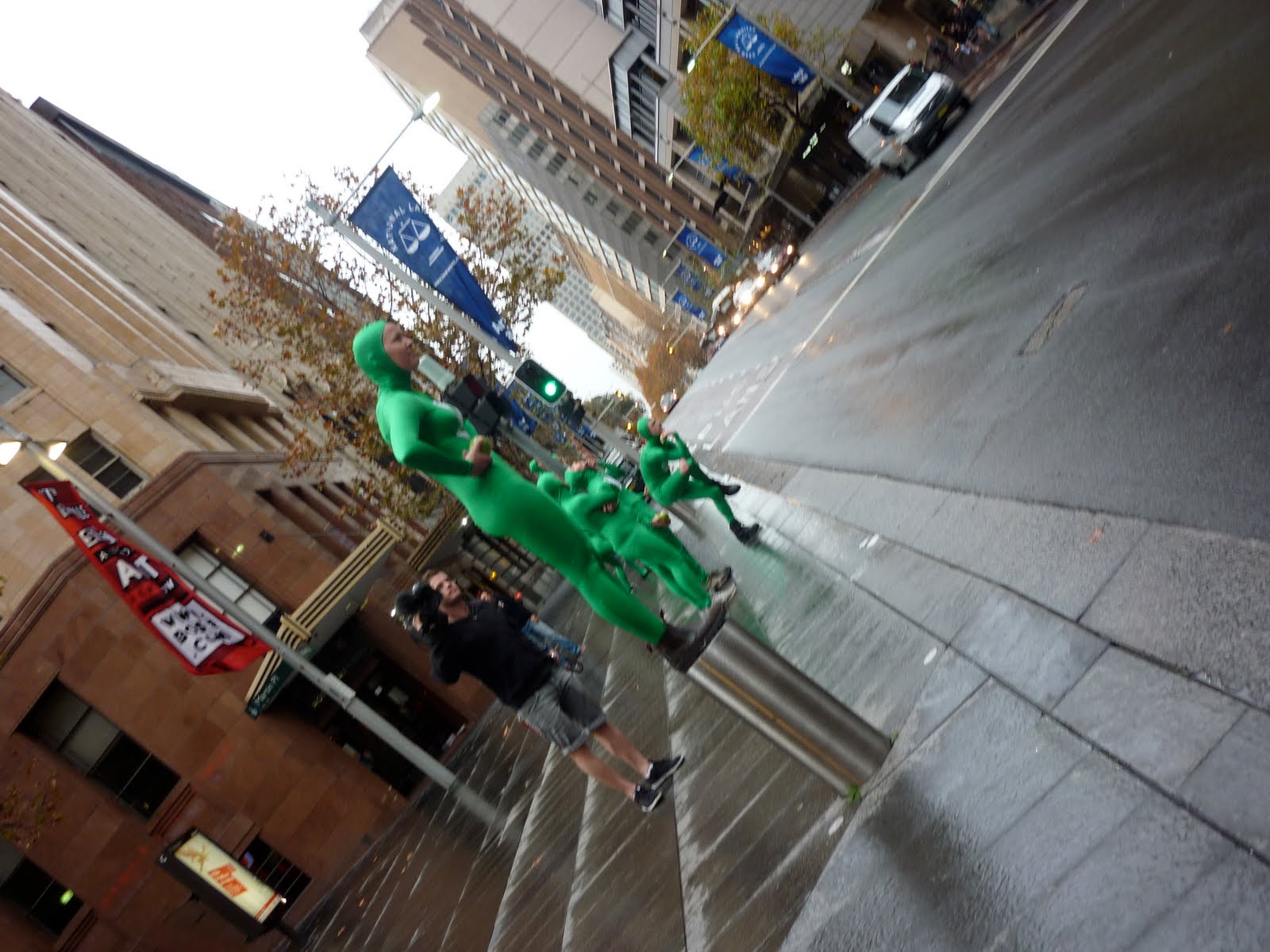 Today I was in my favorite coffee shop and on the TV I could see that Sunrise was showing the Green Gang outside their studio just around the corner. I hurried around and caught their antics. They were harassing pedestrians and clowning around. Great stuff on a wet Sydney morning. Left my good camera at home (it was raining heavily) and just shot these on my old pocket Panasonic. I asked one of the group who they were and after getting the silent treatment she whispered greengang.com in my ear, I have tried Googling but only came up with a Chinese triad or a cleaning product. I now doubt if they are part of the Biennale. Any leads appreciated.
8 comments:
Labels: Biennale, Martin Place, People 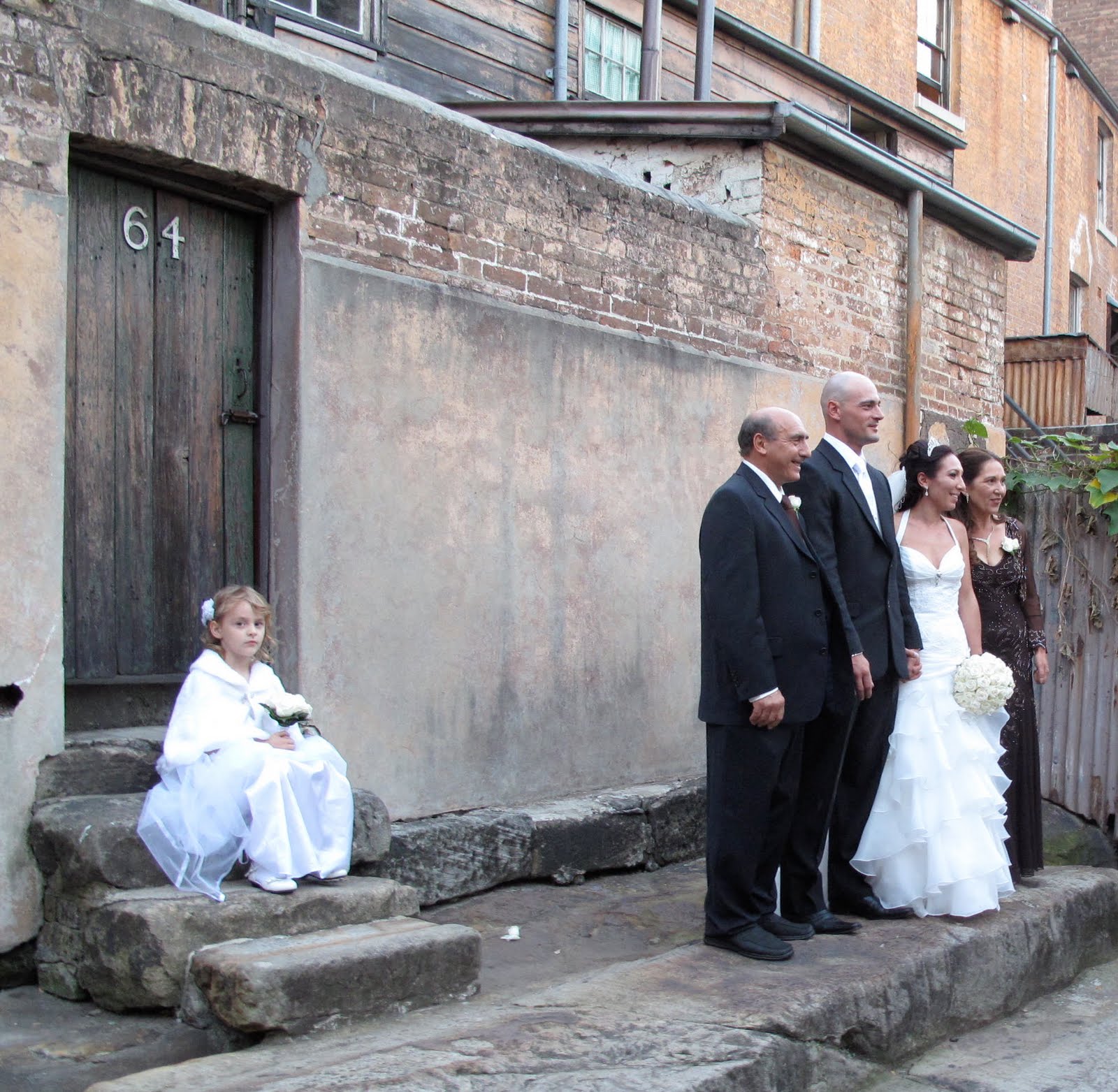 Walking through the backstreets of an old part of town I came upon a wedding being photographed, I always like taking side shots of occasions like this, some of the official party looked like they had enough - like the flowergirl. They were all speaking Spanish, I thought they might have been tourists, but when I asked for permission to take a photograph someone answered in a broad Australian accent: 'Go for your life.'
12 comments:
Labels: People, The Rocks 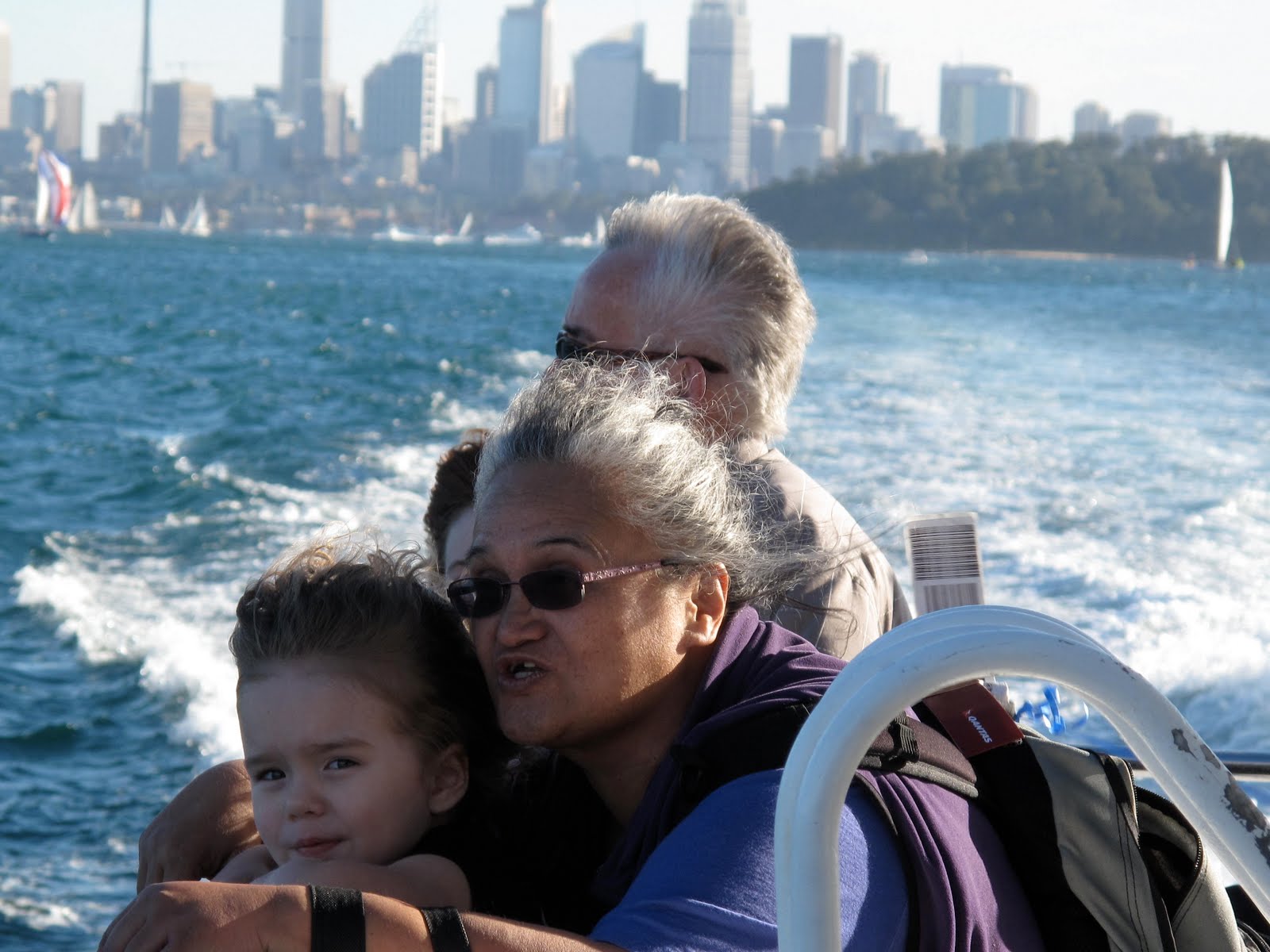 On the Watsons Bay Ferry on Saturday these two were also trying to get a glimpse of Jessica Watson. It was a beautiful trip across the harbour, not too cold to be out on the rear deck and the ferry 'Louise Sauvage' is a Supercat which got up to its max speed of 24 knots, she was flying. If you get a chance this is one of Sydney's best ferry trips with a great selection of fish and chips at the end. I recommend going upstairs to the Watsons Bay Hotel and enjoying the view.
8 comments:
Labels: Ferry, Sydney Harbour 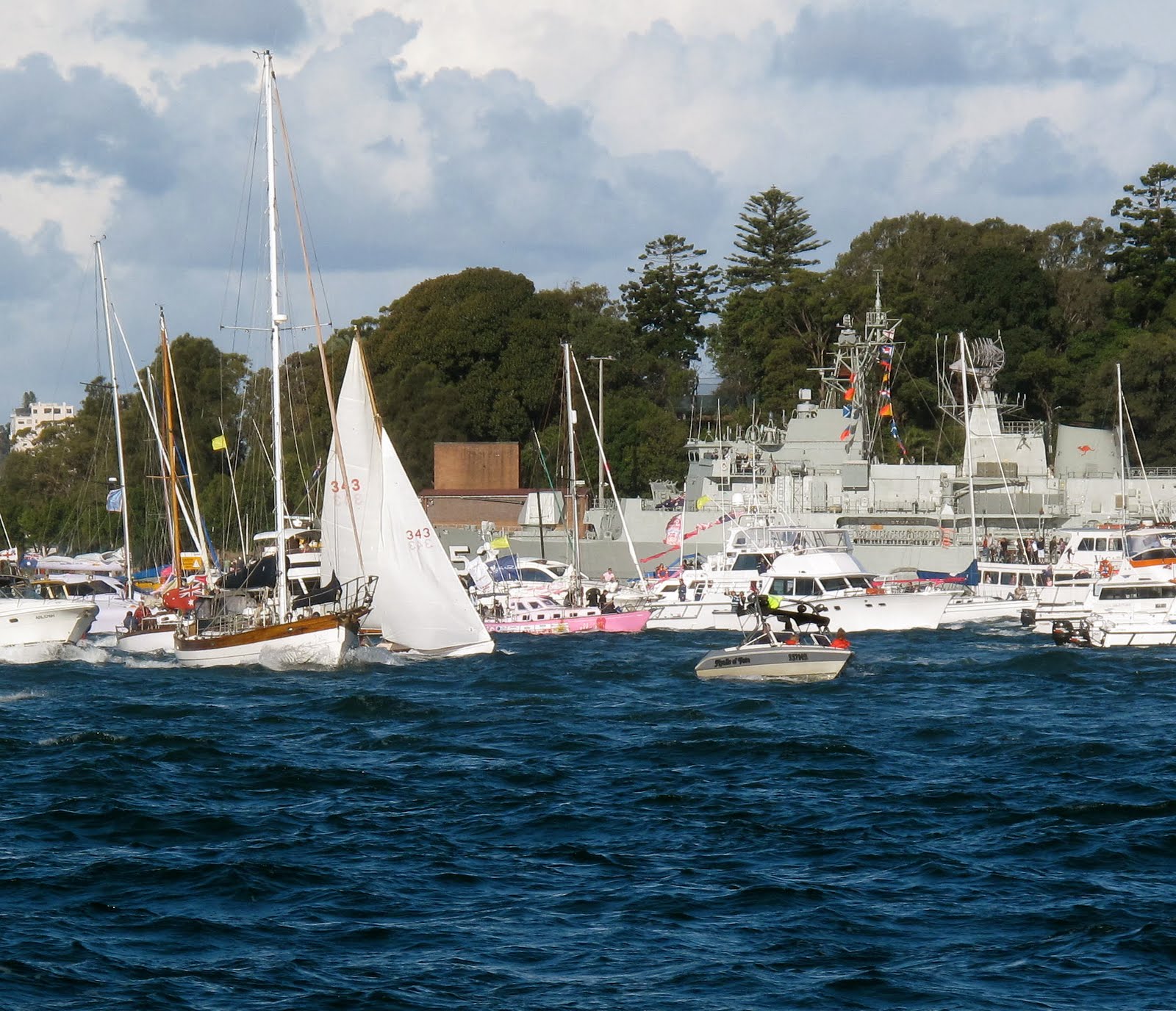 Today after meeting my fellow Sydney Bloggers, I decided to catch a ferry across the harbour. Amazingly it went past this following flotilla. There were hundreds of vessels following a pink yacht which belonged to a 16 year old sailor Jessica Watson. According to the news 'SOLO sailor Jessica Watson, 16, was greeted by tens of thousands of cheering Sydneysiders as she completed her historic bid to be the youngest person to sail non-stop around the world alone and unassisted.' Not a bad effort - I can hardly remember what I was doing when I was 16 (probably thinking about girls and listening to the rolling stones on my cassette recorder) but I am not sure that I could have done this. 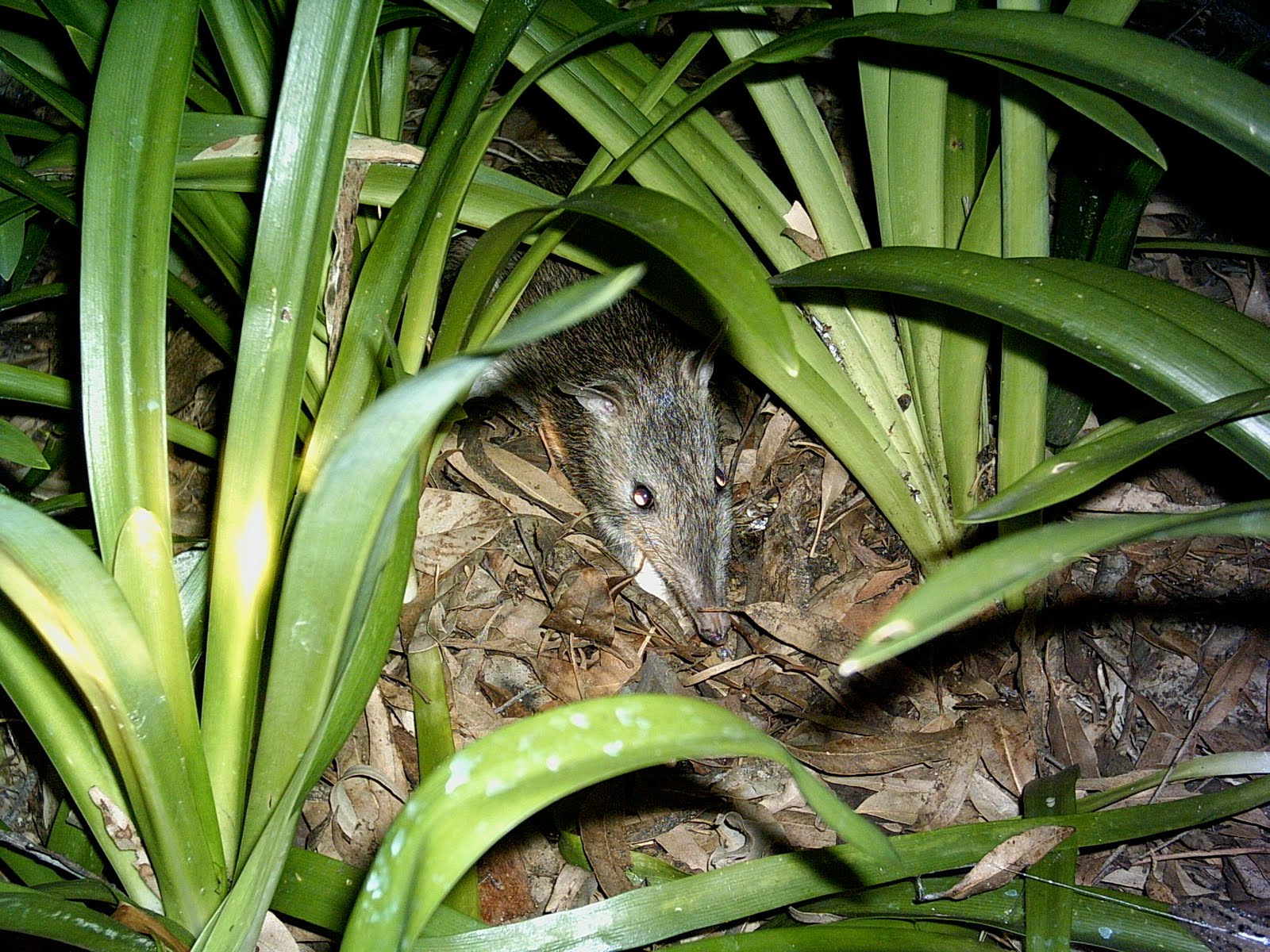 You can see how they got their name, Long Nosed Bandicoot, these little marsupials can be found digging for worms around my house at night. They have a funny hopping run and make a squeaking noise. I know they look rat like but they not.
3 comments:
Labels: Animals 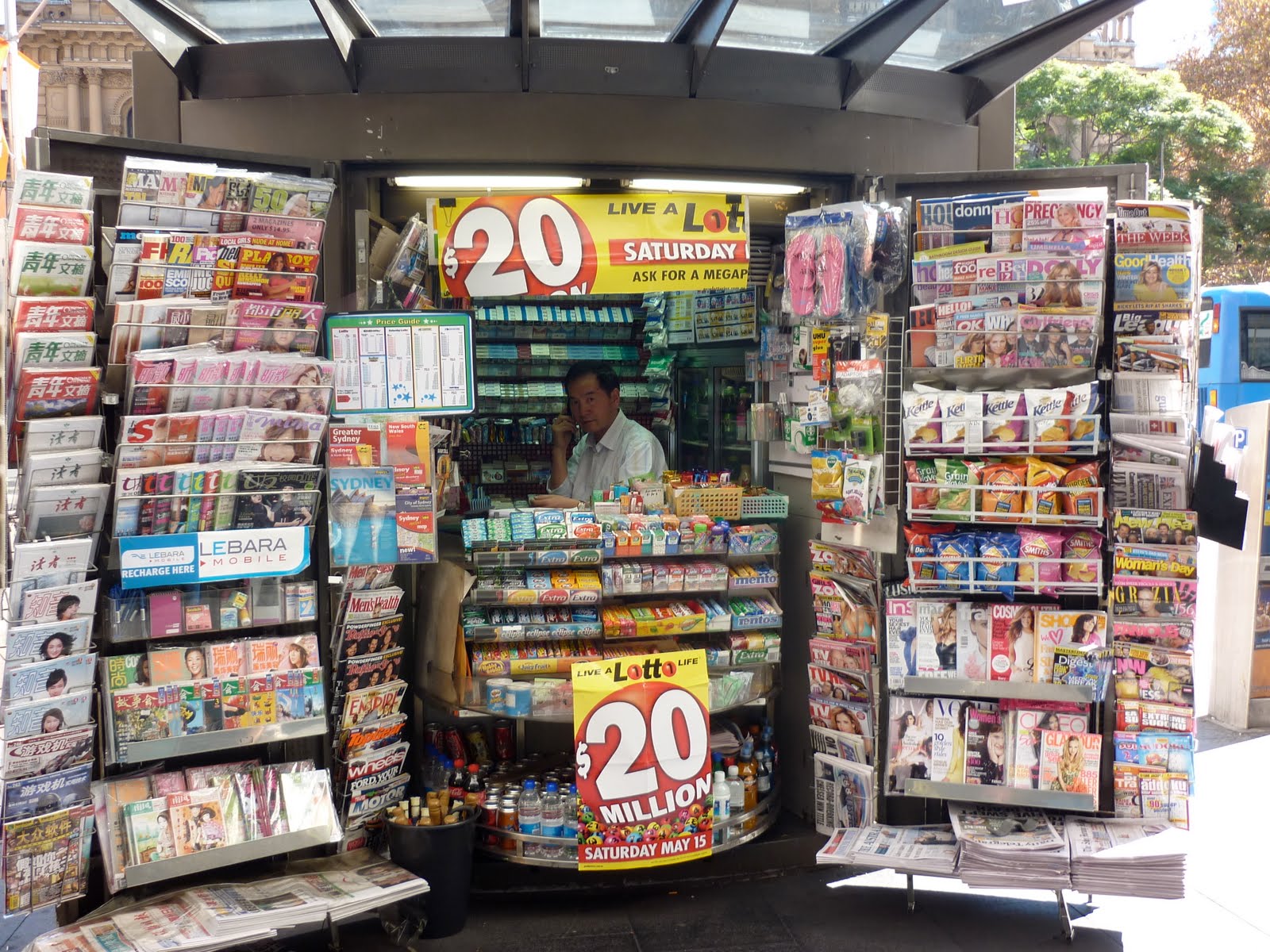 These kiosks are a standard design and sell magazines and the dream of winning lotto. The lottery which was set up by he government to build such things as the Sydney Opera House.
6 comments:
Labels: Shops 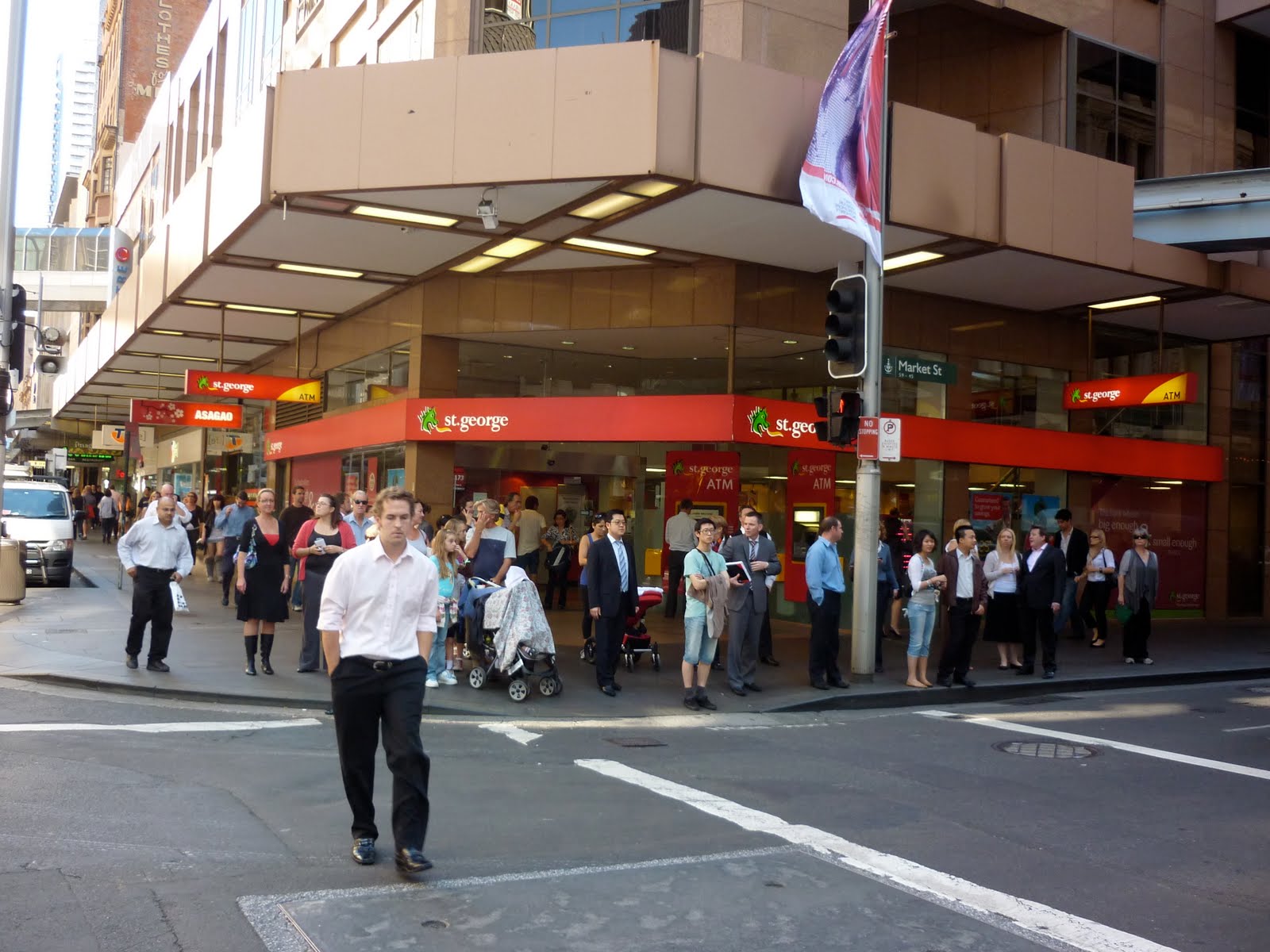 This guy is very casual in his crossing of busy Market Street in downtown Sydney. Sydneysiders are good at crossing against the lights, sometimes the wait at the lights is just too long.
3 comments:
Labels: People 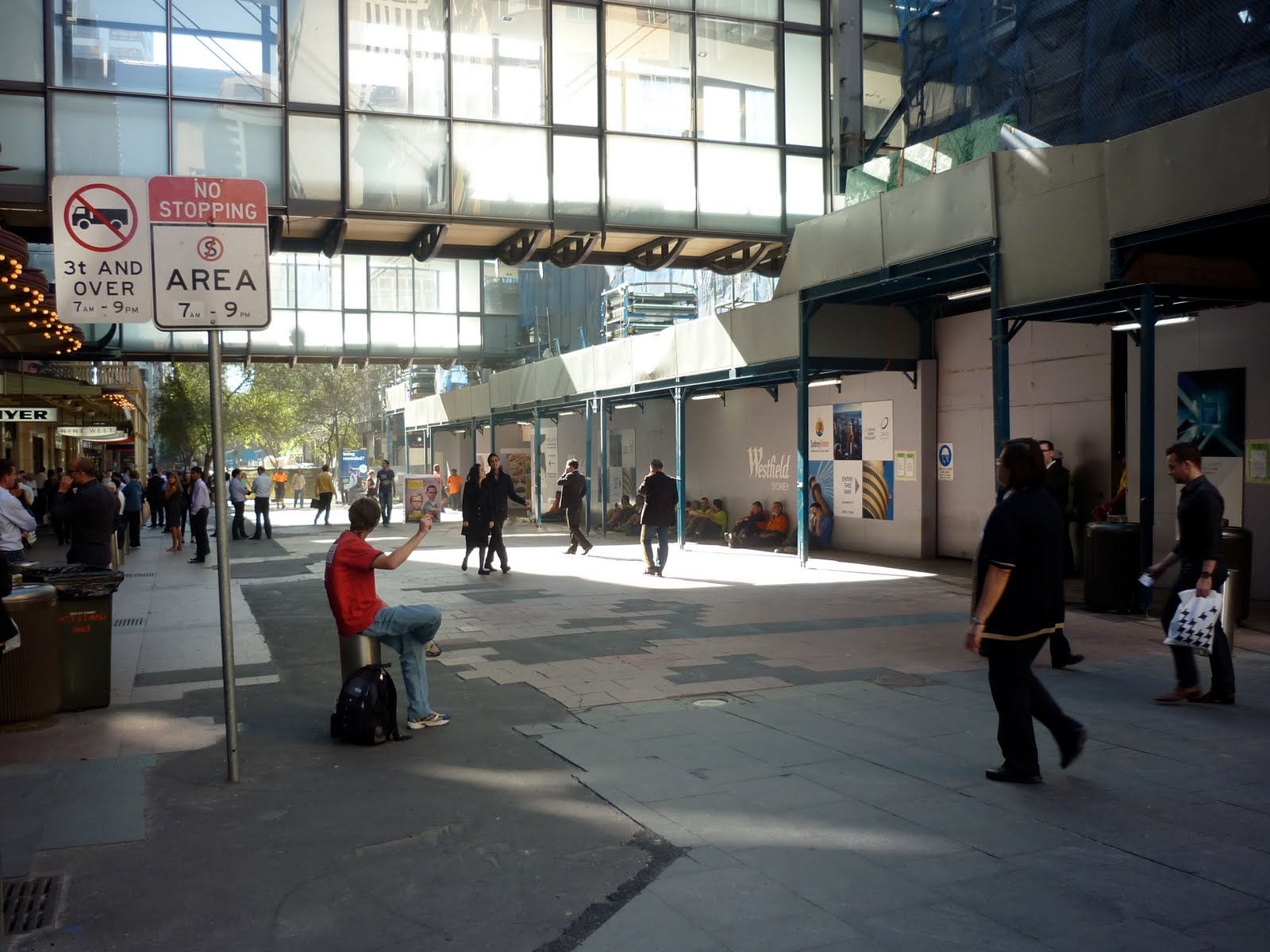 At lunchtime you can see all the construction workers sitting along the wall having their lunch - watching the world go by. It is a bit of a mess here at the moment as they are undertaking a major refurbishment of Centrepoint.
4 comments:
Labels: Centrepoint Tower 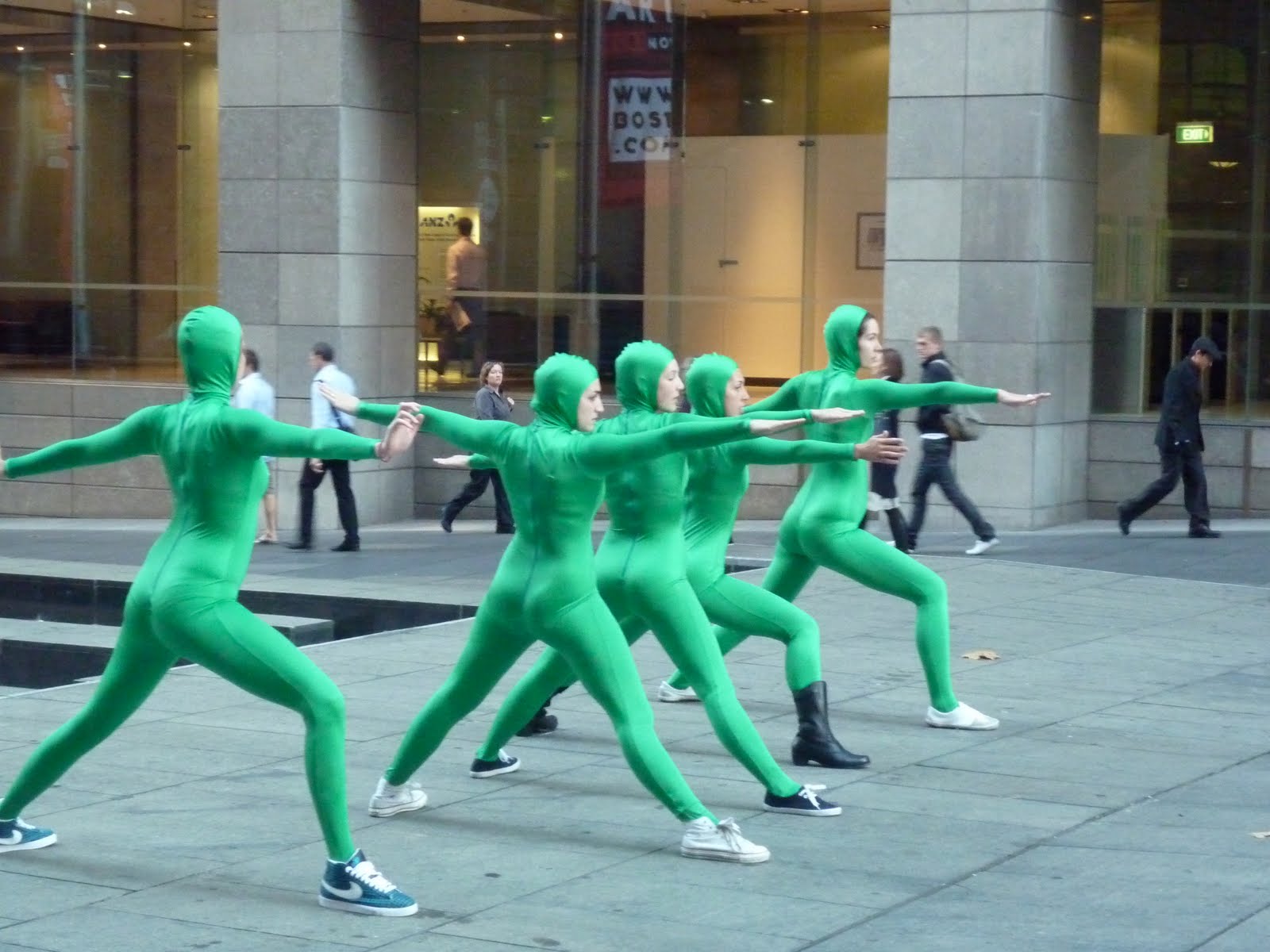 A strange sight walking down Martin Place on my way to work today, wondering what to blog about and these performance artists appeared. They were limbering up at this stage and proceeded to entertain the pedestrains by jumping into garbage bins and generally harassing pedestrians. To read about Sydney's Biennale click here.
5 comments:
Labels: Biennale, Martin Place 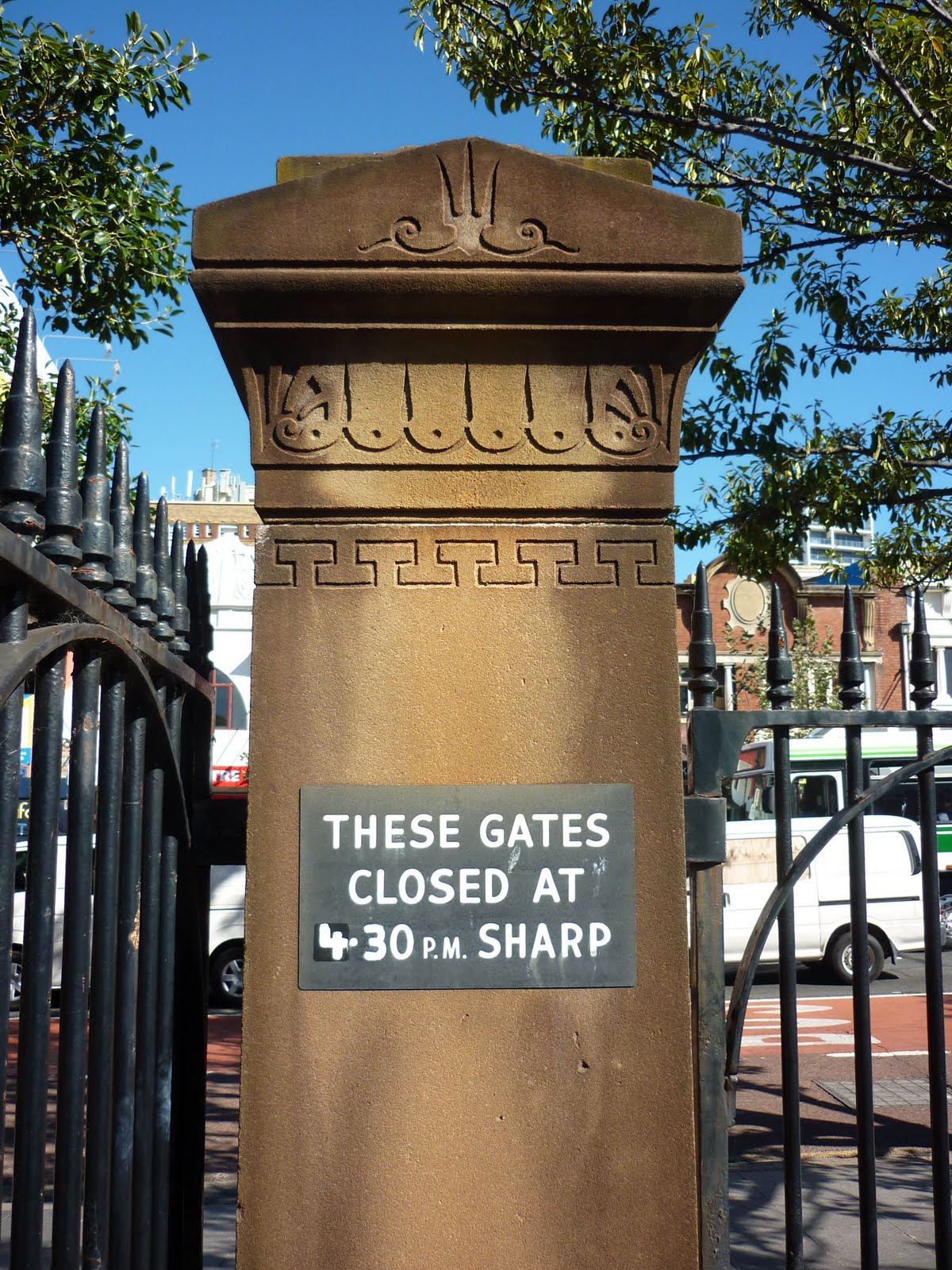 Pretty definite about the closing time - 4.30pm SHARP! must have to get home to pick up the kids from day-care. This is inside the Darlinghurst Court, one of the few NSW Supreme Courts. Another place where capital punishment was carried out.
2 comments:
Labels: Courts, Darlinghurst 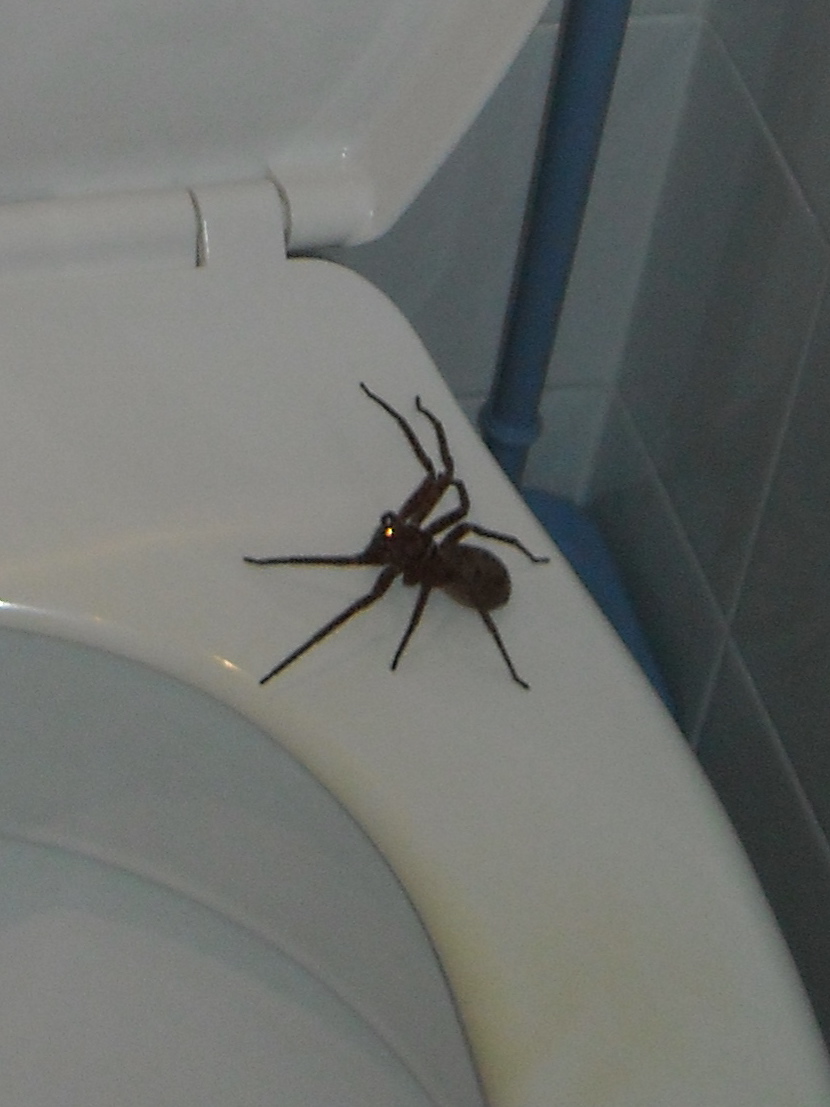 Yes it is real. Luckily its is harmless but not to other spiders.The Huntsman spider is common around Sydney houses and is not usually found on the toilet seat. I like them because it is said they kill the more deadly Sydney Funnel Web Spider - which we have plenty of where we live. A tip - always shake out your boots before inserting your foot!
9 comments:
Labels: Animals 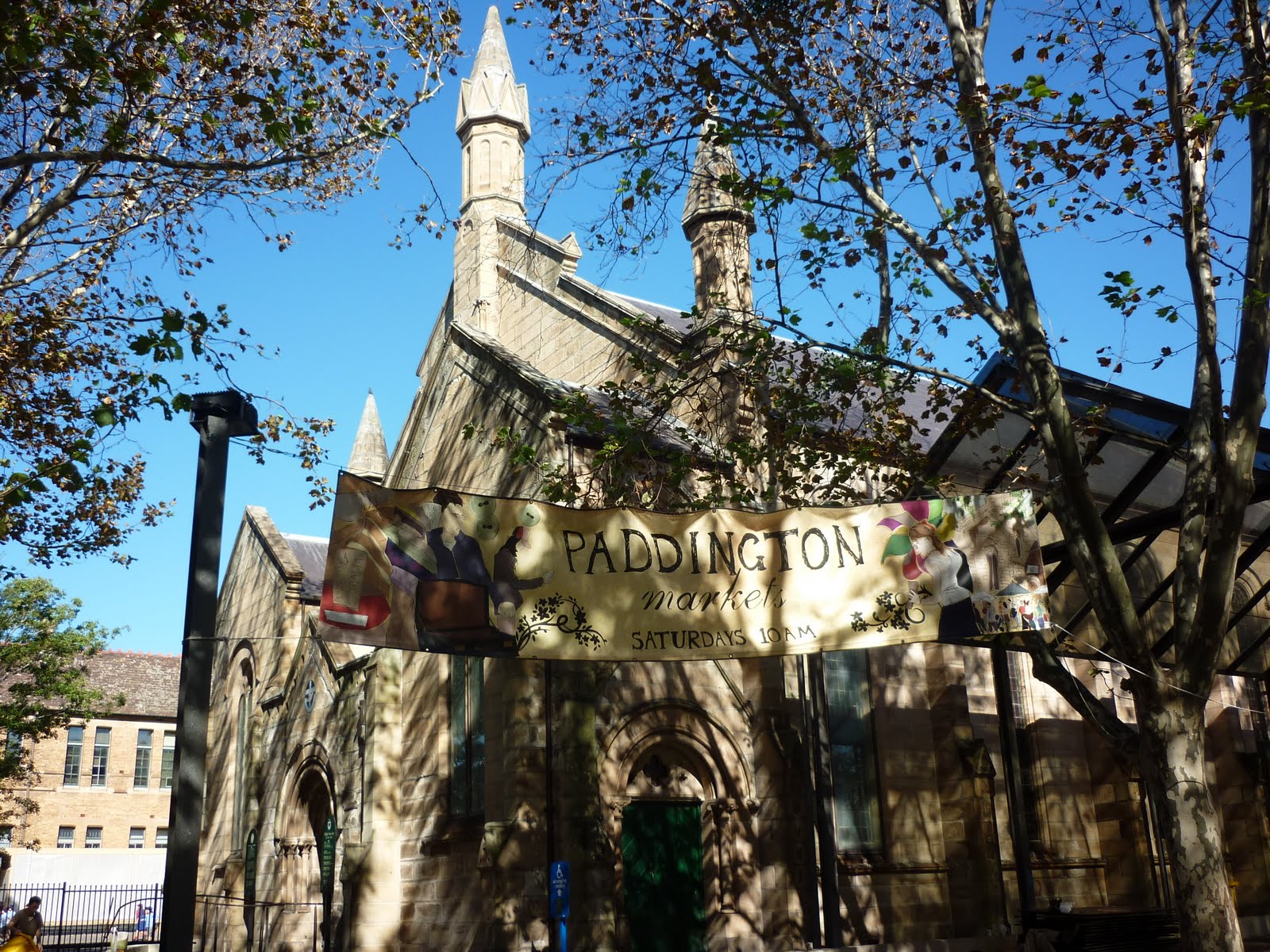 Every Saturday there is a great market held here in the surrounds of this church.
2 comments:
Labels: Churches, Paddington 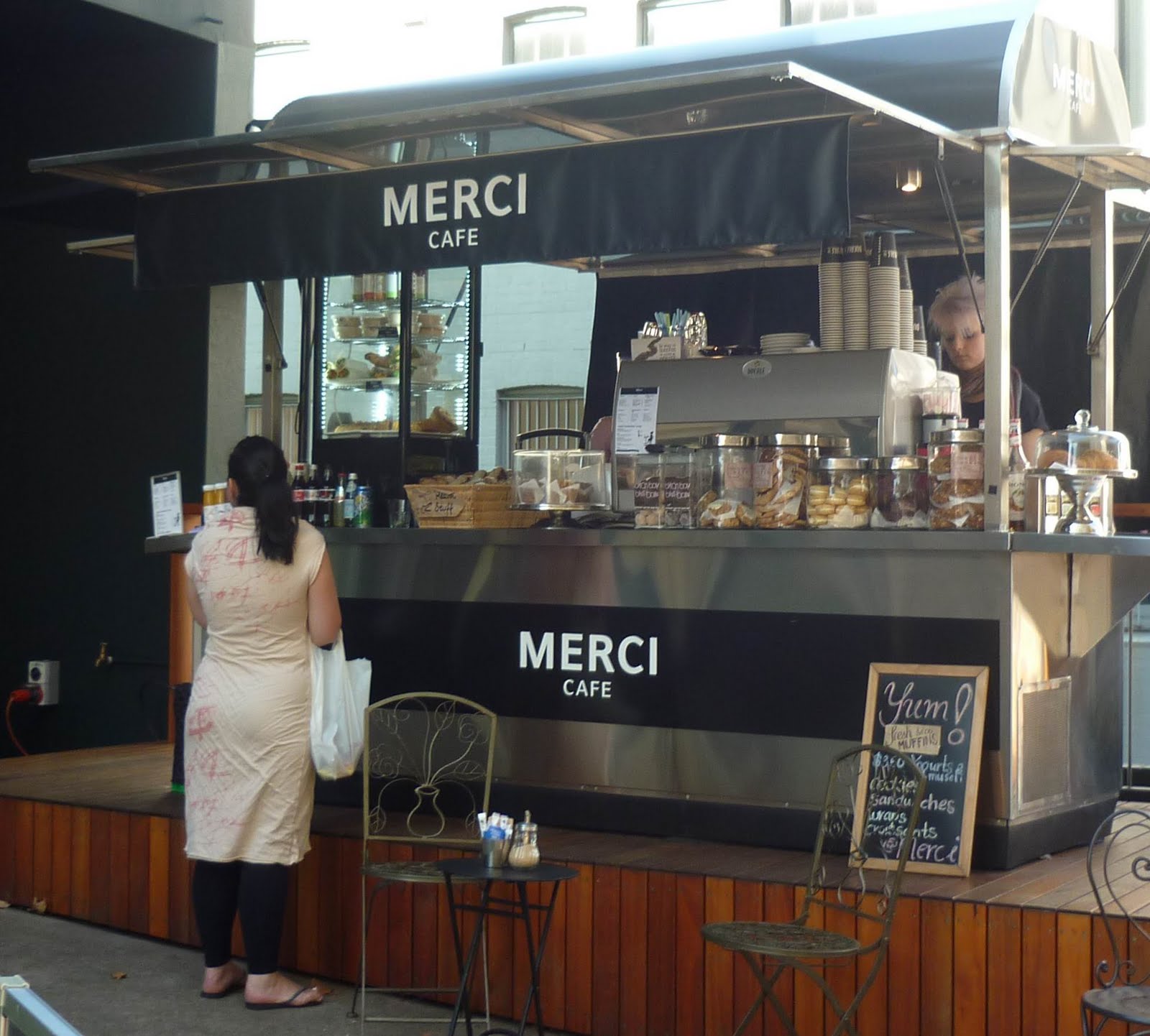 Free plug. They do a great coffee here at the Merci cafe - found on Oxford St at Darlinghurst on the way up to Paddington.
4 comments:
Labels: Darlinghurst, People 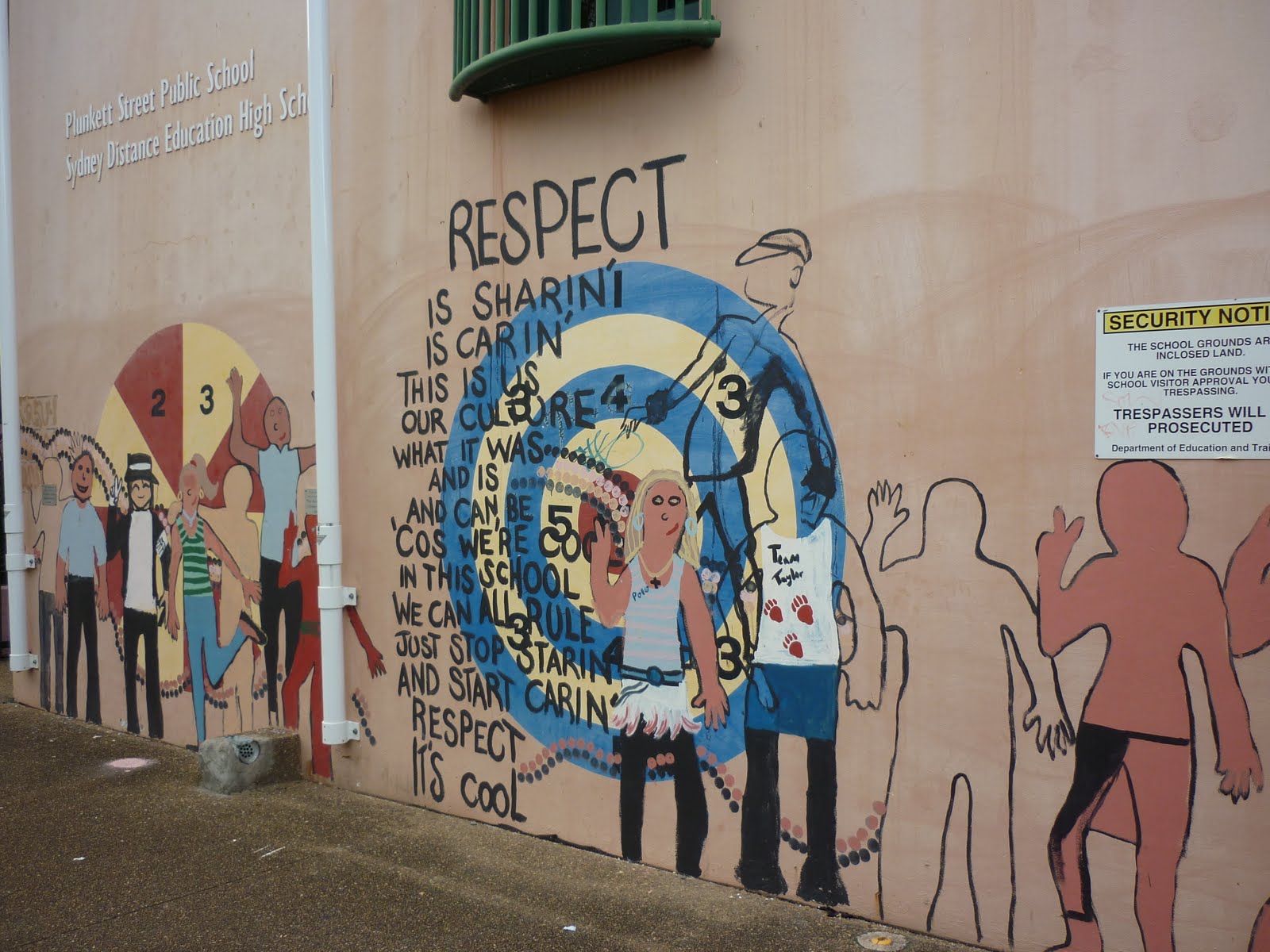 This school graffiti caught my eye, Respect ... down in the back streets of Darlinghurst.
No comments:
Labels: Darlinghurst, Signs 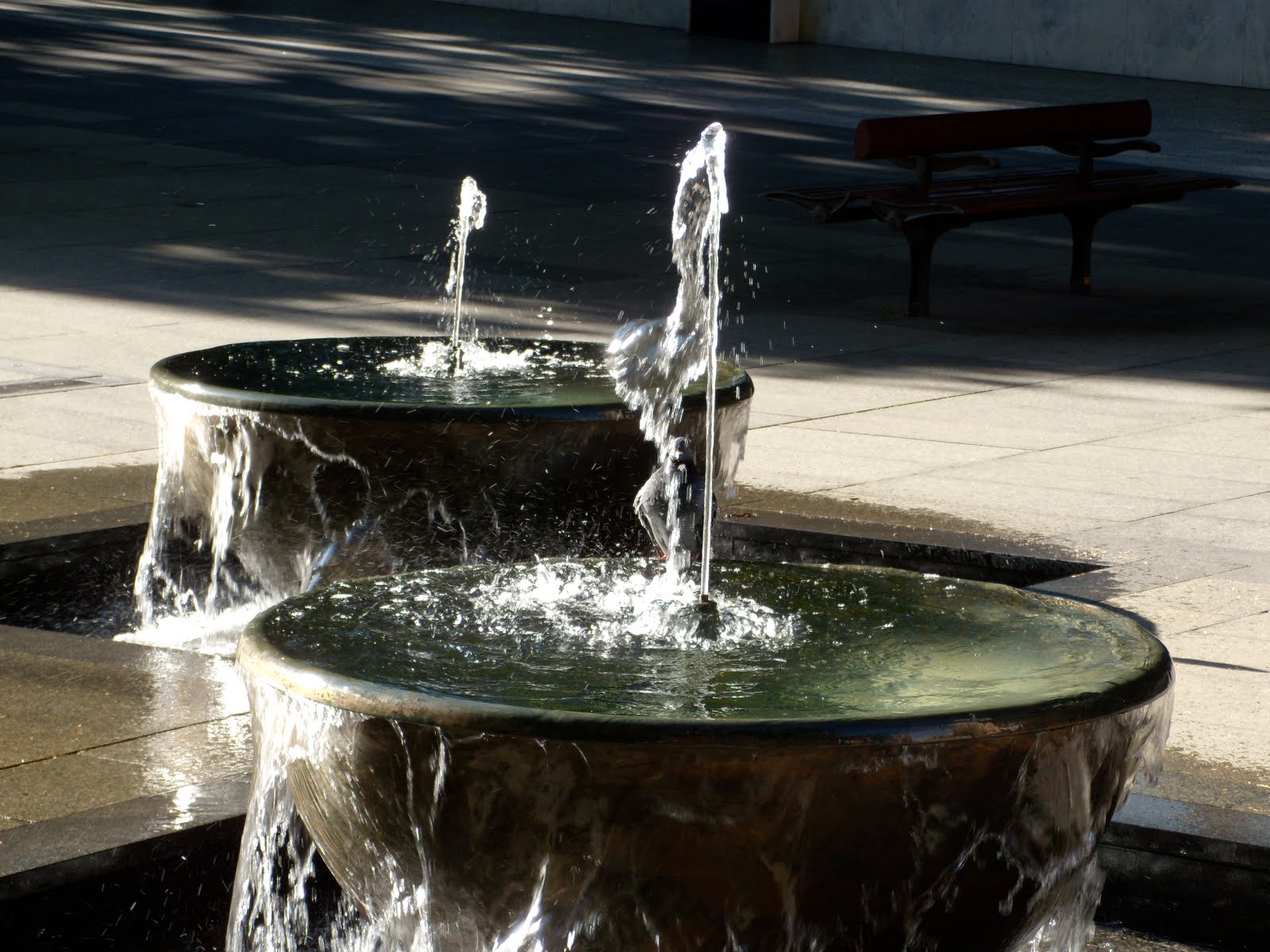 This neat little fountain is at the top of Martin Place near Macquarie St. My research skills have let me down as I was unable to find any information about it.
5 comments:
Labels: Fountains, Martin Place 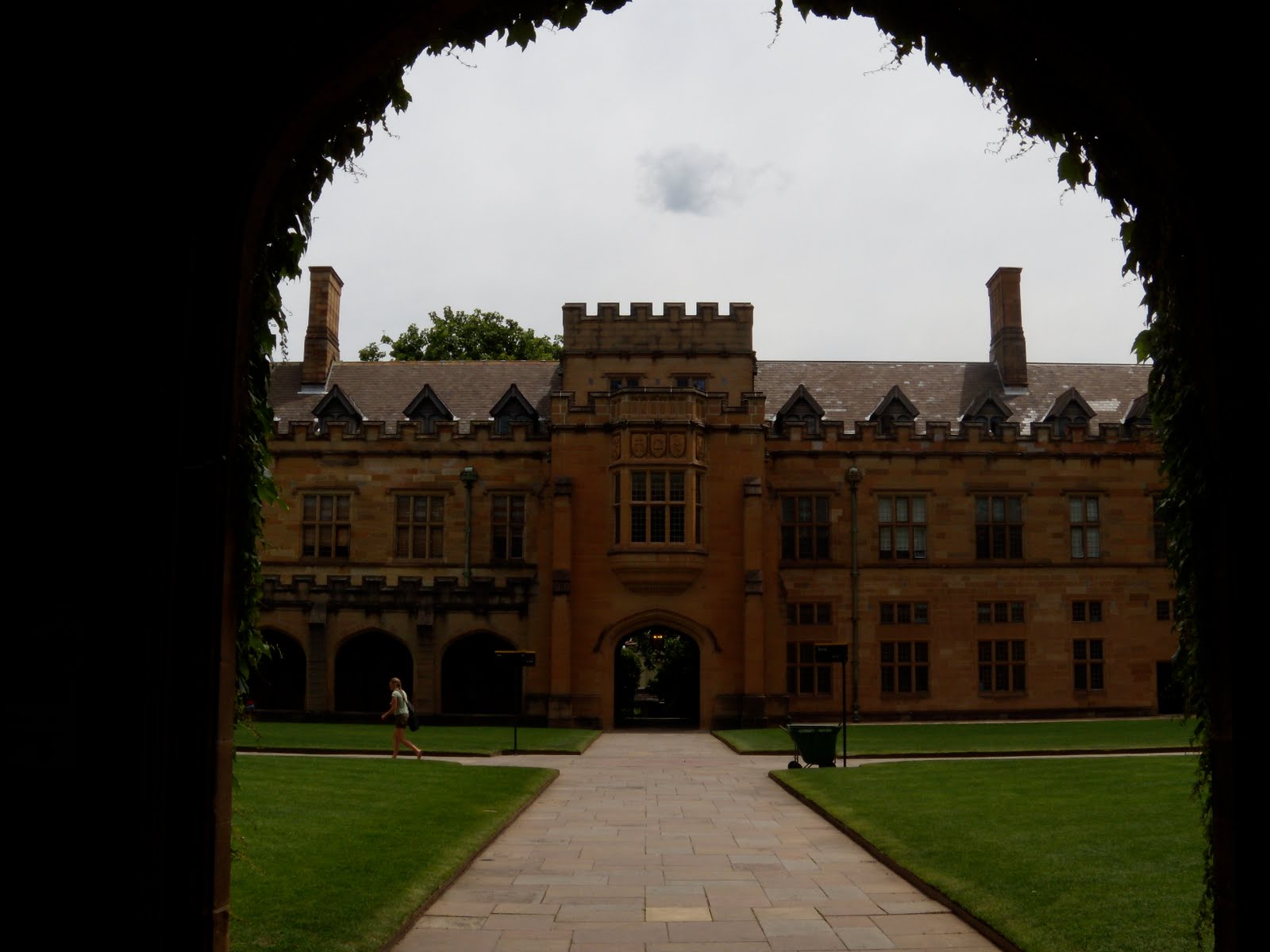 This is looking inside the main quad of Sydney Uni, the architect Edmund Blacket designed the Quadrangle and Great Tower buildings, which were completed in 1862. It is a beautiful place to stroll around as I was the other day waiting for my daughter who is studying there.
5 comments:
Labels: Sydney University This is an iconic Australian car - the first real popular Australian made car - the FJ Holden. I have a bit of a soft spot for Holden's, great to see this restored one on the streets and sporting our Australian flag.
2 comments:
Labels: Cars 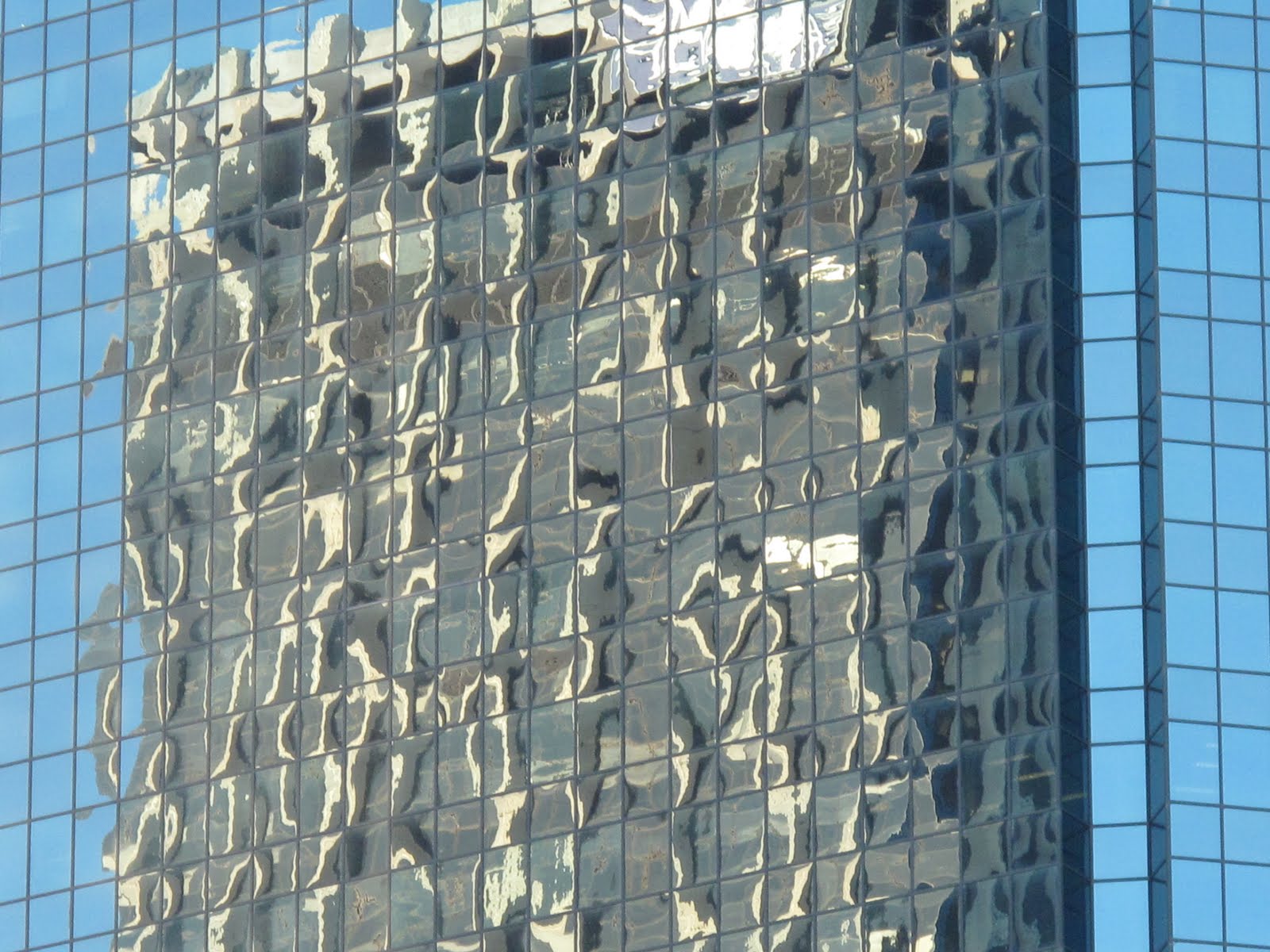 Sydney is full of these modern glass fronted buildings. Not as beautiful - I think - as the old sandstone colonials, but gee they give a good reflection.
6 comments:
Labels: Reflection
Newer Posts Older Posts Home
Subscribe to: Posts (Atom)

You are welcome to use any of these photos.
Just drop me a line if it is on the front cover of National Geographic ...